Southern states, including North Carolina, had prohibited teaching slaves to read and write prior to the Civil War. With emancipation, former slaves clamored for schools. With the assistance of the Freedmen's Bureau and northern organizations, like American Missionary Association, former slaves opened schools in many localities throughout the former Confederacy. In this photograph, black children posed outside the James' Plantation Freedmen's School in North Carolina, probably in October 1868. 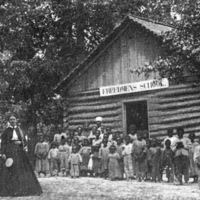