When the North gave freedom to the slaves of the South it saw the necessity of giving them also the education which was necessary to their proper appreciation and employment of their liberty. The people of the North saw, too, that it devolved on them to give this education as it had given liberty, for the old power which had withheld one had prohibited the other, and was not likely to freely offer it now. The North did its duty; the schoolmaster followed the flag wherever it went; missionaries labored most faithfully in the new fields which the invading armies of the country opened as they had never been opened before; the slaves, alive to the fact that they could learn to read openly instead of by stealth, proved most earnest and anxious students; and the good work progressed so favorably and vigorously that, in spite of the violence of old slave-holders and their more rabid dupes, the poor whites, there were in existence at the South on December 31, 1867, 3084 schools, with 6492 teachers and 189,517 pupils. This is the result of a few years' labor against the obstacles of strong opposition from the native whites of the South, and the poverty and almost total ignorance of the class to be instructed. This great work—the true foundation of the real social reconstruction of the South—will have to be stopped, the army of teachers will have to be recalled, the millions of Northern property in schoolhouses and schoolfarms will have to be sacrificed, in the event of the triumph of the Southern rebels by the election of Seymour and Blair. The South in such a case would become too dangerous to Northern teachers, and a standing army could not maintain and carry on the work which has been inaugurated by the establishment of the schools for freedmen. Their interruption and discontinuance would be one of the sorest of calamities to the race and the country.

We give on this page illustrations of a number of the most prominent of the schools at the South under the control and direction of the American Missionary Association of New York, among the strongest as well as the earliest organization to engage in the work of educating the freedmen. The latest report of this Association shows that for the last two years it has had about 500 missionaries and teachers in this field, occupying some of the most important places in nearly every Southern State. It is organized on a catholic and evangelical basis, and seeks the cooperation of all evangelical and patriotic men. Last year its disbursements in this field, including the value of clothing, Bibles, etc., was $375,000, and as large a sum is needed to carry out its plans this year. Its schools have in many places already laid the foundation of a common-school system for their districts or States. One important aim of the Association is to raise up teachers and preachers among the people, as the only possible way of meeting the constantly increasing demand for them. With the aid of the Freedmen's Bureau, and by making all the use it can of the co-operation of the colored people, it has already secured a large number of sites and buildings for high schools, normal schools, and incorporated colleges (not omitting the ambitious University); and it is now straining every nerve to avail itself of present opportunities to establish one or more such institutions in every State where there is a large population of freedmen. In Virginia, at Hampton, where the first slave ship touched our shores, it offers a three years' course of study in a normal and agricultural school, on a farm of 120 acres of choice land, in the cultivation of which the young men defray a considerable part of their expenses; the young women, in like manner, lessening theirs by doing the work of the boarding-house.

High schools are established in Wilmington and Beaufort, North Carolina; Savannah, Georgia; Memphis and Chattanooga, Tennessee; and Louisville, Kentucky. Normal schools at Charleston, South Carolina; Macon, Georgia; Talladega and Mobile, Alabama; and chartered colleges at Berea, Kentucky, Nashville, Tennessee, and Atlanta, Georgia. A peculiar feature of Berea College is, that of the 300 pupils which it numbered last year a little over one-third were white. Its college preparatory class numbered eight; the remainder were in the normal and primary departments. Fiske University, Nashville, has a charter, a corps of ten instructors, and numbers 413 pupils —88 in the normal department, 85 in grammar school, and the remainder in the lower department. It stands on a block of land in the city worth at least $16,000. The Atlanta University, Georgia, occupying a choice location in the city, has a large number of students, in the earlier stages of their course. It is laying the foundations for an important institution, destined to exert a wide influence over the State. At Atlanta as at Wilmington. North Carolina, the Association has an orphan asylum in operation. The school building at Mobile occupies one of the finest sites in the city, and is really one of the most substantial and commodious buildings in the State. It will furnish school-room for 800 pupils.

The Association reports, also, ten evangelical churches in the South under its care, thus combining in one organization a benevolent, educational, and religious work for the lately enslaved and yet persecuted and suffering freedmen, which, if vigorously sustained, must tell effectually on the destinies of the South. 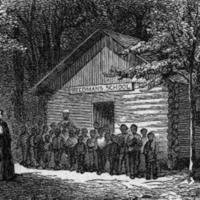 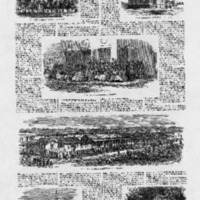