Daniel Harvey (D.H.) Hill, Sr. (1821-1889) was a Confederate general from North Carolina. He served with distinction in a myriad of battles in Virginia at the beginning of the war, but is best known for his conflict with General Braxton Bragg over the conduct of the Battle of Chickamauga. Hill was eventually relieved by Confederate President Jefferson Davis for political reasons, and he retired in Charlotte where he edited and published a local magazine until his death.

Daniel Harvey Hill, Sr. (1821-1889) was a talented Confederate General from North Carolina and brother-in-law of infamous Confederate general, Thomas Jonathan "Stonewall" Jackson. He was educated at the United States Military Academy at West Point and served meritoriously in the Mexican American War. Upon secession, he commanded infantry troops from North Carolina and fought in numerous battles in Virginia at the outset of the war, and eventually in Tennessee as well. Hill remains a controversial figure in the lore of Confederate generals. Known for frequently butting heads with Generals Lee and Bragg, as well as with Jefferson Davis, Hill’s military career during the Civil War was essentially cut short after 1863 for political reasons. He remained in the Confederate Army until the cessation of hostilities, but was given no real command. Following the end of the War, Hill founded and edited The Land We Love in Charlotte, a monthly magazine intended to uplift and redeem the South through discussions of industrialization, education, agriculture, literature and culture. Highly successful and influential, his magazine was declared by William Gilmore Simms as “the best magazine now published in the South.” (Bridges 1961, 273-275) Despite his literary influence and war-time criticisms of Jefferson and Lee, Hill chose not to be openly critical of the Confederate leaders in his magazine in an effort to salvage his damaged reputation following his dismissal from command. At the end of his life, having sold his newspaper, Hill served as the president of Arkansas University from 1877 to 1884 and the Middle Georgia Military and Agricultural College at Milledgeville from 1885 to the year of his death in 1889. (Bridges 1961, 276) 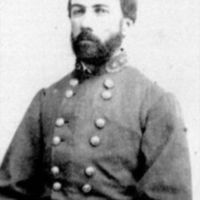