William T. Sherman, a major general for the United States Army during the Civil War, wrote the letter to high political officials of Atlanta, Georgia, including Mayor James M. Calhoun, shortly after he had occupied Atlanta. Sherman occupied Atlanta over a week prior, at the start of September of 1864. Sherman offered a clear warning for civilians to evacuate Atlanta. The letter, most importantly, showed a willingness to wage war at all cost to defeat the â€œRebel Armies.â€ Sherman viewed his tactics as just being a part of war, which soon came to represent not only his opinion, but many of those in the North. Many Southerners, though, saw Shermanâ€™s attacks and occupations by his soldiers as personal and more than just war. The above photo is of General Sherman leaning on a cannon in Atlanta.

Headquarters Military Division of the Mississippi, in the Field, Atlanta, Georgia, September 12, 1864.

I have your letter of the 11th, in the nature of a petition to revoke my orders removing all the inhabitants from Atlanta. I have read it carefully, and give full credit to your statements of the distress that will be occasioned, any yet shall not revoke my orders, because they were not designed to meet the humanities of the case, but to prepare for the future struggles in which millions of good people outside of Atlanta have a deep interest. We must have Peace, not only in Atlanta, but in All America. To secure this, we must stop the war that now desolates our once happy and favored country. To stop war, we must defeat the rebel armies which are now arrayed against the laws and Constitution that all must respect and obey. To defeat those armies, we must prepare the way to reach them in their recesses, provided with the arms and instruments which enable us to accomplish our purpose. Now I know the vindictive nature of our enemy, that we may have many years of military operations from this quarter; and, therefore, deem it wise and prudent to prepare in time. The use of Atlanta for warlike purposes is inconsistent with its character as a home for families. There will be no manufactures, commerce, or agriculture here, for the maintenance of families, and sooner or later want will compel the inhabitants to go. Why no go now, when all the arrangements are completed for the transfer, instead of waiting till the plunging shot of contending armies will renew the scenes of the past month? Of course, I do not apprehend any such thing at this moment, but you do not suppose this army will be here until the war is over. I cannot discuss this subject with you fairly, because I cannot impart to you what we propose to do, but I assert that our military plans make it necessary for the Inhabitants to go away, and I can only renew my offer of services to make their exodus in any direction as easy and comfortable as possible.  You cannot qualify war in harsher terms than I will. War is cruelty, and you cannot refine it; and those who brought war into our Country deserve all the curses and maledictions a people can pour out. I know I had no hand in making this war, and I know I will make more sacrifices to-day than any of you to Secure Peace. But you cannot have Peace and a Division of our Country. If the United States submits to a Division now it will not stop, but will go on until we reap the fate of Mexico, which is Eternal War. The United States does and must assert its authority, wherever it once had power; for, if it relaxes one bit to pressure, it is gone, and I believe that such is the National Feeling. This Feeling assumes various shapes, but always comes back to that of Union. Once admit the Union, once more acknowledge the Authority of the National Government, and, instead of devoting your houses and streets and roads to the dread uses of war, I and this army become at once your protectors and supporters, shielding you from danger, let it come from what quarter it may. I know that a few individuals cannot resist a torrent of error and passion, such as swept the South into rebellion, but you can point out, so that we may know those who desire a government, and those who insist on war and its desolation.

You might as well appeal against the thunder-storm as against these terrible hardships of war. They are inevitable, and the only way the people of Atlanta can hope once more to live in peace and quiet at home, is to stop the war, which can only be done by admitting that it began in error and is perpetuated in pride.  We don't want your negroes, or your horses, or your houses, or your hands, or any thing that you have, but we do want and will have a just obedience to the laws of the United States. That we will have, and, if it involves the destruction of your improvements, we cannot help it.  You have heretofore read public sentiment in your newspapers, that live by falsehood and excitement; and the quicker you seek for truth in other quarters, the better.

I repeat then that, by the original compact of Government, the United States had certain rights in Georgia, which have never been relinquished and never will be; that the South began war by seizing forts, arsenals, mints, custom-houses, etc., etc., long before Mr. Lincoln was installed, and before the South had one jot or title of provocation. I myself have seen in Missouri, Kentucky, Tennessee, and Mississippi, hundreds of thousands of women and children fleeing from your armies and desperadoes, hungry and with bleeding feet. In Memphis, Vicksburg, and Mississippi, we fed thousands upon thousands of families of rebel soldiers left in our hands, and whom we could not see starve. Now that war comes home to you, you feel very different. You depreciate its horrors, but did not feel them when you sent car-loads of soldiers and ammunition, and moulded shells and shot, to carry war into Kentucky and Tennessee, to desolate the homes of hundreds of thousands of good people who only asked to live in peace at their old homes, and under the Government of their inheritance. But these comparisons are idle. I want peace, and believe it (can) only be reached through union and war, and I will ever conduct war with a view to perfect and early success.

But my dear sirs when Peace does come, you may call on me for any thing-Then I will share with you the last cracker, and watch with you to shield your homes and families against danger from every quarter.

Now you must go, and take with you the old and feeble, feed and nurse them, and build for them, in more quiet places, proper habitations to shield them against the (wea)ther until the mad passions of men cool down, and allow the Union and (pe)ace once more to settle over your old homes at Atlanta. Yrs., in haste, 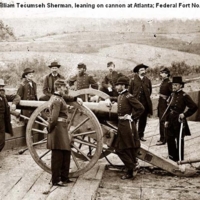 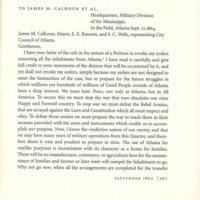 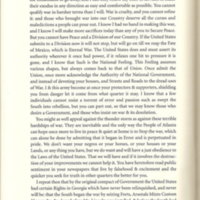 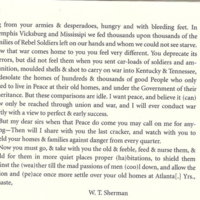