William Woods Holden held one of the most controversial terms as governor of North Carolina during the Reconstruction Era. His actions at this time, though he felt they were justified in helping the state and its residents, led to his impeachment and removal from office. His early career is comprised of his skills as a lawyer, as an editor to a democratic newspaper, and his assistance towards minority and less fortunate groups. He is remembered however, for his impeachment from office for withholding habeus corpus from accused KKK members and for using military force in counties in the state.

William Woods Holden rose in power as a whig and a republican. He was a practicing lawyer, but also the ironic owner of a Democratic newspaper in North Carolina. He ran for the Governors seat a few times before finally being elected in 1868, but was immediately met with resistance when the previous Democratic office holder refused to leave. Only through the use of a military General and Reconstruction laws was Holden able to take his seat. This would foreshadow how the rest of his governorship would look like. In his attempt to reorganize the government, re-stimulate the economy, and give equal rights to black citizens white democrats rose up in opposition in the form of the Ku Klux Klan. After "losing" control of Caswell and Alamance counties, Holden declared them to be in a state of insurrection, authorizing him to use military force. After organizing a militia, paid by the state treasury and under the leadership of George W. Kirk, Holden made arrests, including that of Josiah Turner, and refused the writ of habeaus Corpis for any of them. Frederick Studwick, a supposed KKK member in the state house of representatives, filed for impeachment against Holden. The charges would include unlawful and illegal uses of the state treasury to fund illegal troops, illegal declaration of states of insurrection, illegal arrests, dismissing rights of habeus corpus, and unlawful arrest of Josiah Turner. Holden was declared guilty on March 22, 1871 on the charges listed above, although they were not all the charges that were used against him. 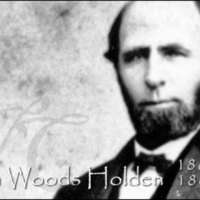