John Barrett’s 1956 book, Sherman’s March through the Carolinas, is one of the first thorough studies of Union General William T. Sherman’s march through the Carolinas, particularly through the state of North Carolina. Barrett’s scholarship focuses on how the campaign through the Carolinas was the most important part of Sherman’s March through the South. To support this assertion, Barrett uses letters and orders from Sherman himself. The evidence ranges from letters to his wife, Ellen, to military officials and President Lincoln. Barrett also includes documents from other Union soldiers like General Henry Hitchcock and Lieutenant Colonel George Nichols. Barrett uses accounts from citizens in the South, usually more prominent ones, like Governor Zebulon Vance of North Carolina and David Lowry Swain, president of the University of North Carolina at Chapel Hill during the war, to provide details on how Sherman’s March impacted local citizens. The sources that Barrett uses are broad, but mostly focus on an elite perspective, with few accounts from the common person. Barrett's complex, detailed portrayal of Sherman is impressive. Sherman, who was building a house in Louisiana at the start of the Civil War, loved the South, but was forced to return north after the outbreak of the Civil War to serve his native Union. In Barrett's words Sherman was, “Torn between respect for the Union and affection for the South, Sherman had no desire to take part in the strife that seemed inevitable.  Sherman wrote: ‘I would prefer to hide myself, but necessity may force me to another course.’”(Barrett 1956, 12)

Barrett does not believe that Sherman’s March was the main campaign that led to the collapse of the Confederacy and the surrender at Appomattox.  Barrett instead attributes the surrender more so to the “practical annihilation" of Confederate General Hood’s army in Tennessee. However, Barrett does not question that Sherman’s March played a critical role in demoralizing the South and making it much more difficult for the South to continue the war physically. Although to Barrett the march was not the most significant event to lead to Appomattox, the portion of the march through the Carolinas was important, and the most impressive portion of the march. While those that experienced the destruction within the state of Georgia might not agree with Barrett’s assessment, Barrett’s research provides one of the most in-depth looks at Sherman’s movement through the Carolinas, and its significance within the Civil War.

Sherman's movements through South and North Carolina were bold, imaginative strokes, masterfully executed.  One historian has rightly characterized the Carolinas campaign as "a triumph of physical endurance and mechanical skill on the part of the army and of inflexible resolution in the general . . . .”  Sherman was absolutely sincere in his conviction that total war was the most effective means at hand to shorten the conflict; yet, this method of warfare, as applied in the Carolinas, had little appreciable effect on the Confederate collapse.  It was the practical annihilation of Hood’s army in Tennessee that paved the way for Appomattox.

The Federal march north from Savannah brought home to the people of the Carloinas the stern realities of war.  The use of military force against the civilian population and economic resources unquestionably helped undermine the morale of the South, producing a “defeatist psychology” both on the home front and on the battlefield.  Lee’s ranks were thinned daily by the desertions of soldiers going home to protect their families in the line of Sherman’s march.  In this respect the Carolinas campaign had an indirect effect on Grant’s operations in Virginia. 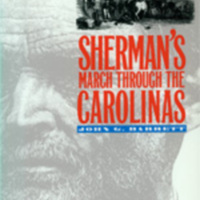