The article described the violence the Ku Klux Klan carried out in North Carolina and compared it to the same violence that is seen in surrounding southern states, such as Tennessee and Texas. This article argued that the violence portrayed in the state demonstrated how Reconstruction was taking place throughout the south. This kind of action that was taking place was expected during a time such as Reconstruction. The government had the right to engage in the manner in which Governor Holden and the government of North Carolina did. The new government upheld previous democratic ideals; it did not forbid the people to make their own laws but no longer allowed one class to enjoy the power to disenfranchise and oppress another class either. The article illustrated how the conflict to defuse the violence conferred the Reconstruction acts as preliminary power.

The murders and outrages which have called forth the proclamation of the Governor of North Carolina, are made by the World a pretext for arraigning the policy of reconstruction. Its censure is directed, not against the cowardly ruffians who are the authors of crime, but against the Government whose authority is exercised to secure their punishment. Bands of men, disguised, have roamed about the State, killing and destroying property, and perpetrating nameless outrages, the victims in every case being loyalists, white or black. Yet these crimes the World mildly designates “vagaries,” and their perpetrators are represented as enjoying the favor of the community, whose sympathies are thus actively enlisted against the local Government. We quote:

“This government naturally has proved powerless to restrain the excesses of the bad, because it has, proved powerless to command the sympathies of the good in the community. The scandal of the existence of such a government has excused, in the eyes of a high-spirited and resolute people, the vagaries of those who, under the pretext of relating its oppressions, chose to band themselves together for the gratification, either of their political passions, or of lower and less pardonable appetites. “

Nor are we allowed to hope for an improvement. The social conditions here indicated “must remain unchanged,” the World asserts, “so long as the system endures under which they have been generated.” “A people forbidden to make their own laws,” our contemporary adds, “will not rally to enforce the laws which are made for them.”

Wendell Phillips, entering upon a crusade against the white people of the South, would desire no stronger justification than that which the logic of the World affords. The worst enemy of the South never inflicted upon it more discredit than is involved in the apology of its Democratic champion. For the plea urged in extenuation of crime in North Carolina is equally applicable to every other reconstructed State. The social conditions, which are the assigned cause of murder and arson are not peculiar to the State of which Mr. Holden is Governor. If the reasoning of the World is worth anything, we might expect to find everywhere under reconstructed government the same defiant hostility to the authority of law, and the same sympathy with the organized savagery known as the Ku Klux Klan.

The fact that the prevalence of crime portrayed by Gov. Holden is peculiar to North Carolina, and to parts of Tennessee and Texas, is a sufficient answer to the World’s statements. Taking the South as a whole, we believe life and property are now as safe there as in Northern States. There was a period, undoubtedly, during which a different state of things existed. But with the completion of reconstruction, and the restoration of the States to their position in the Union have come order, security, and peace. There are “high-spirited and resolute people” in Virginia, in South Carolina, in Alabama, in Mississippi; yet who has heard of crimes akin to those which are common in North Carolina in the States. Unless something of this sort be found in Virginia, or South Carolina as well as in North Carolina, the theory by which the World attempts to use violation of the laws as an argument against reconstruction falls to the ground. 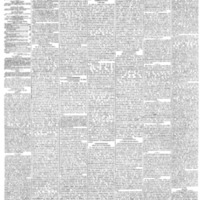