During the latter part of the Civil War, the Union formulated a policy that would allow for the enlistment of African Americans, many former enslaved men from the South, to enlist and become soldiers fighting on behalf of the Union.  Once the Civil War concluded, African Americans still were not considered citizens even though they fought on the side of the Union.  Relatively soon after the end of the war, Confederates began being pardoned and accepted back into the Union as citizens.  This political cartoon, published in 1865, shows an array of former Confederates begging at the feet of Columbia for pardon and readmission into the Union as citizens.  It is beside another illustration with Columbia standing along with a wounded African American Union Civil War veteran with the caption “Shall I trust these men, and not this man?”  This political cartoon alludes to a feeling that came as a response to the brave fighting of African American troops on behalf of Union during the Civil War – a feeling that led to the idea that they were worthy of becoming citizens.  This cartoon highlights the irony of restoring citizenship to a group of people that fought directly against the Union, but not being sure of giving citizenship for the first time to a group of men that fought so courageously for the Union. 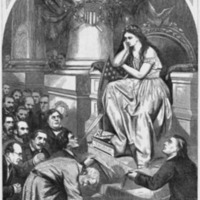 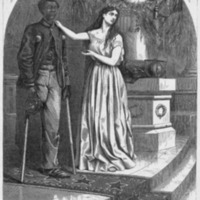