The editor of the The Daily Herald, a Democratic paper, addresses the ongoing secession crisis and the effect of President Lincoln's election in 1860. The author heavily criticizes South Carolina for acting immature and celebrating the election with threats of secession. The author then condemns secession on moral grounds, claiming that secession can only lead to violence and destruction of government. The author then goes on to question why any state would want to leave such a wonderful country where everyone is entitled to freedom. 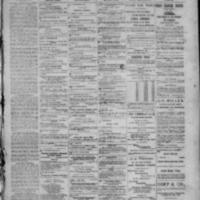