This article was written on June 24, 1865, by employees of Harper’s Weekly, a Republican newspaper, to share its opinions on the Reconstruction efforts in North Carolina with a broad audience. This article dealt with the argument on federal authority. It praised President Johnson for his firm position on Governor Holden’s impeachment. President Johnson believed that Holden was an extension of federal authority and should not be removed unless the federal government saw it fit to remove him. The debate over states’ rights versus federal authority was a focal point during Reconstruction and created a rift within the Republican Party.

The President's reply to the Committee from North Carolina, begging him to recognize that State as fully restored to the Union, and to ask from Congress a repeal of the test-oath, confirms what we said last week of his views in regard to the unorganized States.

The President replied courteously that the North Carolina Legislature had not yet adopted the constitutional amendment, which was an essential condition of restoration, and he declined to answer specifically the other questions asked, saying only that Governor Holden would continue to act as Provisional Governor until relieved from Washington, and not by the result of the election ordered by the Provisional Convention. In a word, said the President, â€œMy action must depend upon events.â€

The Secretary of State, by the President's order, has also informed Provisional Governor Perry of South Carolina that he will learn from Washington when he is relieved, notwithstanding the election of Mr. Orr; that the adoption of the emancipation amendment â€œis deemed peculiarly important,â€ and that â€œit is impossible to anticipate events.â€

These things all show that the measures adopted by the President are experimental. He is testing the condition of the unorganized States. He is ascertaining whether they faithfully accept the situation. Therefore he can not anticipate events. While he sees that South Carolina merely repeals the ordinance of secession, and does not repudiate the rebel debt, and does not voluntarily adopt the amendment; while he sees Georgia refuse to repudiate her rebel debt, notwithstanding his plain instructions to Governor Johnson; while he sees Mississippi elect an unpardoned rebel for Governor in place of a technical Unionist, and in North Carolina the Union candidate defeated; while he sees every where in the Southern States an animosity toward the freedmen which warns him and the country not to abandon them to the mercy of State laws, the President very naturally says to Mr. Reid of North Carolina that his action must depend upon events.

Meanwhile it is pleasant to know that the policy of the President receives the unqualified support of the remains of the late unfortunate Democratic party. Supported thus by his opponents, as well as his friends. the era of good feeling must be at hand. 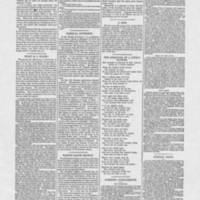