The article was written on June 17, 1865, by employees of Harper’s Weekly, a Republican newspaper, to share its opinions on the Reconstruction efforts in North Carolina with a broad audience. The article discussed the topic of states’ rights versus federal authority. The article took the position that the national government should dictate the terms and course of Reconstruction in North Carolina. The paper expressed the belief that former Confederates could not be trusted with the duty of reorganization; therefore, the federal government was left to clean up the mess. The debate over states’ rights versus federal authority was a focal point during Reconstruction and created a rift within the Republican Party.

That the loyal freemen of a rebellious State who have fought bravely for the Government should be disfranchised, when the victory is won, by those in the same State who have fought against it, and who yield because they are conquered, not because they are converted, is something which we have no doubt seems as monstrous to President Johnson as to any other truly loyal citizen. The sole question in his mind undoubtedly is in what manner they shall be enfranchised. We therefore regard his proclamation for reorganization in North Carolina as tentative. It invites an expression of public opinion. The President does not assume to settle the question, for he knows that it must finally be decided by Congress, which is judge of the qualifications of its own members. And it is not improbable, that by some positive action like the proclamation he wished to concentrate public attention upon the subject.

The objection to the enfranchisement of all the freemen of the State for the primary election by the authority of the United States, is that suffrage is a matter left by the Constitution to be regulated by the States. Who, then, compose to-day the State of North Carolina? Who have the right to exercise political authority there? Who are â€œthe peopleâ€ of North Carolina?

By the arrest of Vance, duly elected Governor by the late laws of North Carolina, its late Constitution has been annulled by the National Government. The State can therefore be reorganized only by the supreme power of the Government. â€œThe peopleâ€ who are henceforth to constitute the State are to be designated by the nation. It is the necessity of the case. The national authority is clearly competent to declare that those who were voters under the late Constitution shall, under certain conditions, be the people. But its power is equally clear to
declare that none of them shall make part of the people.

The plain fact is, that political power for the purpose of reorganization can be exercised only upon the terms prescribed by the National Government. The Supreme Court decided on the 9th of March, 1863, in the case of the Hiawatha, that by the laws of war every citizen in a hostile State was a public enemy. His subsequent participation in political power is therefore an act of grace, not a claim of right; and what shall determine the limits of that grace but the will of the authority that confers it? Whatever, for instance, the late Constitution of North Carolina may ordain, no citizen in that State can vote by any enabling force of that instrument. The State, therefore, as a political body, is to be re-created by the National Government. Otherwise it will no longer exist. But this recreation is not restoration. The right of voting is not conferred because it was formerly enjoyed, for it is not conferred upon all, but only upon those whom the Government chooses. Many of those voters whom it will create were, indeed, formerly voters. But they are permitted to vote now, not because they once had the right, but because they are loyal, or for some other reason. And even if it were contended that the permission is to be viewed as the remission of a forfeited right, it is remitted upon conditionsâ€”and what is to prevent the imposition of a condition securing the enfranchisement of all the loyal freemen of the State?

We are told that â€œwith the rehabilitation of the Southern States of course all the reserved rights of the States must revive.â€ Undoubtedly when there is practically a State in North Carolina or elsewhere, it will have all the rights of a State. But is there a State there now, practically speaking? If there be, by what right does the United States Government prescribe the conditions of suffrage in the State? If there be a State of North Carolina, in the same sense that there is a State of New York, let the National Government leave it to settle its own internal affairs. But if the National Government may properly regulate the reorganization of North Carolina, there is, in the same sense, no State there. There are not two ways of being a State in the Union. If, as is sometimes urged, one loyal man is the State when there are no other loyal citizens, then the Government of the United States must regard him exactly as it does the State of Illinois, defending him against invasion or rebellion, but not interfering with â€œthe reserved rights of States,â€ including the regulation of suffrage.

Such a statement is manifest nonsense. If the National Government may interfere at all, it may interfere in the manner and to the degree that seem to it advisable. The object is to bring the political community known as the State of North Carolina into practical relations with the Union. When those relations are established, but not before, it will enjoy all the rights of every State. 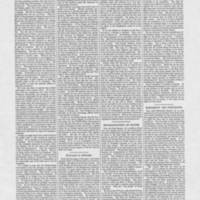