The article was published on December 29, 1866, by employees of Harper’s Weekly, a Republican newspaper, to share its opinions on the Reconstruction efforts in North Carolina with a broad audience. This article shared the news that many of the Southern states, including North Carolina, rejected the 14th Amendment. According to the article North Carolina defeated the amendment with a vote of 93 to 10 in the Lower House and 44 to 1 in the Upper. Harper’s Weekly believed that such a decisive rejection of the 14th amendment showed that those hostile whites whom the Republican Party sought to repress had succeeded in gaining power in the state. The article criticized President Johnson’s Reconstruction plan referring to it as his failed experiment. The article believed that this moment proved President Johnson’s inability to control the Southern states and thus advocates for Congress needed to take control and adopt harsher policies toward the South. The article reflected the lack of control the federal government had over the Southern states early on in Reconstruction as well as the rift between President Johnson and more radical Republicans.

THE North Carolina Legislature, by a vote
of 93 to 10 in the Lower House, and 44 to
1 in the Upper, has rejected the Amendment.
Arkansas, Alabama, and Florida have done
likewise. Governor Humphreys recommends
its rejection to the Mississippi Legislature, and
Governor Orr to that of South Carolina. The
Georgia Legislature would prefer a Territorial
Government, according to the telegram, rather
than the Amendment; and the President of its
Senate, â€œamidst great applause,â€ declared that
â€œhuman forbearance has its limits, and the
worm will turn if trodden on.â€ Mr. Raphael
Semmes, Moral Philosopher, announces, in a
lecture at Galveston, that he has been at home
endeavoring to restore his State to her place in
the Union without tarnishing her honor. The
Milledgeville Southern Recorder declares that â€œif
this Union is to stand, the rights of the South
must be respected.â€ Mr. Alexander H. Ste-
phens is equally strenuous against the Amend-
ment, and for â€œthe continuous rights of States.â€
Every leader of opinion, every newspaper of in-
fluence, the Legislatures and the Governors in
the unrestored States, are unanimous against
the Amendment. Not a single powerful voice
in those States has been raised for it.

Meanwhile the petition of the loyal Loui-
sianians, signed by Governor Wells and oth-
ersâ€”the declaration of Ex-Governor Holden,
the President's Provisional Governor of North
Carolina, and of a Committee from that State
â€”and the statements of the Southern Loyalist
Association in Washington, all agree that the
governments of the unrestored States are in the
hands of men hostile to the National Govern-
mentâ€”that the Union men in these States are
consequently oppressed and in constant danger
â€”that the liberty and property of the Freed-
men are virtually at the mercy of the disloyalâ€”
that justice for loyal men in the civil courts is
uncertain, and military protection inadequate.
To these statements must be added the reports
of great destitution in certain districts; the
general apathy or sense of insecurity which
springs from the consciousness of a radical de-
rangement of local public affairs; the unwill-
ingness of capital or labor to move toward dis-
turbed States, and the necessary paralysis of
industry. Looking at these facts, with a due
knowledge of history and experience of human
nature, it is not very difficult to understand the
situation with which the country is now called
to deal.

The Amendment we must consider virtually
rejected as a condition of restoration. The
President's policy, or experiment, has also fail-
ed. The unrestored States must therefore be
considered as substantially in the condition in
which they were when the Presidential experi-
ment beganâ€”with this advantage, however,
that their real spirit has been fully revealed.
Yet we would not be unjust to those who have
honestly acquiesced; who took up arms and
fought; were beaten, and own it, and now ask
only that the conditions of restoration shall be
just in themselves, consonant with the spirit of
the Constitution and with the national safety.
But such are not the men nor the sentiments
which control the action of the unrestored States.

In this situation, then, the first question is,
whether Congress should hope for a reaction of
opinion, and for the adoption of the Amend-
ment by the unrestored States, and postpone
further action of its own toward restoration?
But upon what ground can a change of feeling
be reasonably expected? The first response to
the offer of the Amendment was the New Or-
leans massacre, when the controlling opinion
of the late rebel States relied upon the Execu-
tive to sweep out Congress with a bayonet.
Then came the Philadelphia August Conven-
tion, stimulating the unrestored States to refuse
the Amendment, and claiming to represent the
true sentiment of the country upon the subject.
It was not surprising that those States then
sneered at the Amendment. But when the
question was formally submitted to the people,
and they universally and overwhelmingly ap-
proved the Amendment as the condition of res-
toration; and after the author of the Phila-
delphia address, which incited the States to
oppose the Amendment, told them distinctly
that they must accept it or prepare for more
stringent measures, there is a general and
haughty refusal. Undoubtedly the country
believed that conditions so just and generous
would be, if not heartily, yet at least silently
accepted. Their imperious rejection reveals
a state of mind which indicates the wisdom and
necessity of other measures. The refusal of
the Amendment must dispel a great deal of the
doubt which many loyal men had of the actual
national necessity of more stringent and rad-
ical measures. They perhaps believed in a
kind and reasonable feeling in the unrestored
States, which it is now evident does not ex-
ist, or does not control State action.

It would appear, then, that Congress, the only
adequate authority, must begin exactly where
the President did. The people of the unre-
stored States rebelled, and framed new local
governments, which were overthrown by the Na-
tional arms. They were left without any lawful
government in their States, nor can they law-
fully acquire any except such as is initiated and
approved by Congress. Congress must there-
fore specify by whom the first step toward such
a Government shall be taken; and when its
Constitution is finished it must be, in the judg-
ment of Congress, of such a republican form that
the guarantee of the Union may be pledged to
it. This leaves in the limbo of political meta-
physics, where they belong, all theories of Terri-
torial condition or State suicide. Those are
abstractions which Mr. Lincoln properly de-
scribed as pernicious. Equally so is the Pres-
ident's assertion, and that of the Democrats who
support him, that the States having been pre-
vented from seceding have all their rights un-
impaired. Why, then, did he appoint Provi-
sional Governors, and define the qualifications
of the suffrage?

There is no need of entangling ourselves
with theories and definitions. The one imper-
ative necessity is, that the measures which Con-
gress takes to restore the governments of the
States shall be just, wise, generous, and in the
spirit of the Constitution. And we reserve to
another day comments upon the various prop-
ositions already made. 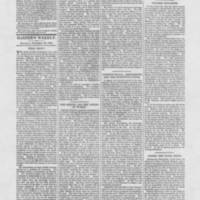