The article was published in the December 8, 1866 issue of Harper’s Weekly, a Republican newspaper, to share its opinions on the Reconstruction efforts in North Carolina with a broad audience. This article criticized the proposals of impartial suffrage and general amnesty for Southern states supported by Unionist and Southern sympathizers. The article argued that if an education test was required to vote in place of the 15th Amendment it would succeed in eliminating many African Americans, but it would also eliminate poor whites and according to the article, that would eliminate half of white voters in North Carolina. The article believed that this would give the power right back to the “enemy,” or the educated wealthy elites of Southern society. In this view, such actions would alienate those who were more likely to ally themselves with the Republican Party. The article then argues that equal suffrage cannot go hand in hand with general amnesty because it would allow too many former Confederates to regain their power. This article supported the Republican Party policy that tried to court poor white voters to extend the Party’s national base and power during Reconstruction.

WHEN a country has been convulsed by a
domestic war which has torn up old social
systems by the roots there is no short and easy
path to universal tranquillity. The danger to
be apprehended is an attempt to reach arbitrari-
ly and impatiently those results which can never
be attained except by deliberation and time, or
the operation of the laws of nature and human
society. Therefore a wise man reads at pres-
ent in our political almanac, â€œLook out for all
kinds of political panaceas and nostrums about
this time.â€ Among these a very loudly adver-
tised specific is Impartial Suffrage and General
Amnesty. But a very suspicious fact is, that it
is recommended by two classes of personsâ€”Un-
ion men whose advice was timid and wrong in
every crisis of the war, and Southern sympa-
thizers who were the most desperate and un-
scrupulous of public enemies.

The qualification of the suffrage which is
recommended is education. Nor can there be
any question of the vital importance of intelli-
gence to voters. But the question of the suf-
frage must be regarded by us at this time in its
bearings upon the national security. Now the
strength of the Union sentiment in the unrep-
resented States is undoubtedly among the col-
ored population and the poor whites, as in parts
of Arkansas, Tennessee, Georgia, and North
Carolina. The strength of the disloyal senti-
ment is among the educated classes. An edu-
cational test for the suffrage would enfranchise
possibly six or seven per cent. of the colored
citizens now, and it would disfranchise probably
half of the poor white classes of the States we
have mentioned. If, therefore, a plan of an
educational test of suffrage and a full amnesty
were adopted as a substitute for the Amend-
ment proposed by Congress, we should have
intrenched and fortified the enemy, for we
should have secured political power to the class
most hostile to us.

The truth is, that the matter is much too com-
plicated to be successfully dealt with by a phrase,
however symmetrical. It is utterly useless to
combine the two propositions of qualified equal
suffrage and general amnesty. If equal suffrage
in the disturbed States be essential to the na-
tional security, the national authority should
establish it. That is one thing. If general
amnesty be compatible with national safety, let
the national authority proclaim it. That is an-
other thing. But it certainly does not follow
that if it be necessary to establish equal suffrage,
it is wise to reinstate rebels; for the conse-
quences of one process may very easily paralyze
the intended results of the other.

The whole matter is a question of statesman-
ship. The object is to prevent the resumption
of political power by the party lately in rebell-
ion, and still frankly hostile to the Union, by
such measures as are not incompatible with the
principle of the Government and with the na-
tional safety. The Congressional Amendment
proposes to do this by basing representation
upon the number of voters, under certain con-
ditions, and by making certain rebel leaders
ineligible to office at the pleasure of Congress.
This last provision is that which stings the hos-
tile sentiment most, and that which the general
amnesty would remove. But in any system
of reconstruction that inability is essential.
Whether Congress leave the actual settlement
of the suffrage to the States or directly ordains
it, and whether the suffrage be qualified or uni-
versal, the official ineligibility of the leading
political chiefs at the national pleasure is indis-
pensable. Nor is it very wise to say, as the
Tribune does, that because ultimately the ban
would be removed, therefore it may as well be
removed now. A thief sentenced for twelve
months will be released at the end of a year.
Should he therefore not be sent to jail at all?

The object of the demand of equal suffrage
and general amnesty when it proceeds from
the Copperhead organs is plain. The conven-
ient classical line which warns us to fear the
Greeks bringing gifts may be liberally render-
ed, Look out for the cat in the meal-tub. The
Copperhead calculation of the situation under
this policy is, first, the recognition of the pres-
ent State organizations in the late rebel States,
which are now exclusively in the hands of the
late rebels; and, second, the disfranchisement
of the great mass of the loyal men in those
States, and the consequent perpetuity of polit-
ical power in its present hands. Was the war
fought, and were the late elections carried, for
such a result as that? 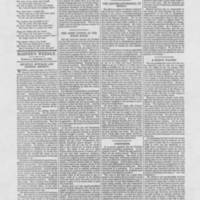