The article was published on May 26, 1866, by Harper’s Weekly, a Republican newspaper, to share its opinions on the Reconstruction efforts in North Carolina with a broad audience. This article accused President Johnson of being too soft on the Southern states and advocated for more, hasher conditions for readmission back into the Union. It criticized Johnson for putting party advantages ahead of public welfare, meaning Johnson's policies were designed to court potential white voters over to the Republican Party instead of securing the rights of all men in the Southern states. Harper’s Weekly then advocated that African Americans be given the vote and only then would states be allowed to choose their own destiny. They concluded that Johnson’s policies will not be successful, so why not take the burden off of the federal government and leave it up to the states. This article highlights the debate over suffrage and voting rights as well as the split between Republicans that continued throughout Reconstruction.

IT seems to us they greatly mistake the tem-
per of the loyal majority of the American
people who suppose that because there are dif-
ferences among them upon certain points of
policy, they will, therefore, from sheer impa-
tience, grow careless of securing the victory they
have won. If the correspondent of the London
Times reports truly, even the President himself
makes the mistake of considering the loyal ma-
jority as aiming merely at a party advantage
and not at the public welfare. He forgets that
he could be as easily accused of holding his
course merely with a design to secure his own
re-election. Indeed the freedom with which
the President assails the motives of those who
decline to receive his views as the perfection of
statesmanship is one of the unpleasantest epi-
sodes of this interesting time.

The truth is, that, with the utmost magnanim-
ity and a cordial desire of restoring the Union
to its normal condition, there is no considerable
number of faithful Union men in the country
who believe that the late rebel States should be
restored to their national relations without fur-
ther condition. Those who hold that they
should be, are the late rebels, their Copperhead
allies, and a very few who have hitherto acted
with the Union party, and of whom Senator
Cowan, of Pennsylvania, is a representative.
These all believe with Alexander H. Ste-
phens, that as Congress did not consent to
Secession the seceding States had a continuous
right to resume all their relations with the
Union at their pleasure. There is no middle
ground between this preposterous opinion and
the position of the faithful citizens who sus-
tained the war and elected Mr. Lincoln and
Mr. Johnson. As Mr. John L. Thomas, Jun.,
of Maryland, said, in his manly and admirable
speech of the 21st of April, the late rebels â€œare
either to be consulted as to what conditions will
best please them, or we are to make known to
them upon what terms we please to receive
themâ€¦â€¦ We are either to exact no guarantees
for future security, or we are to impose such
guarantees as Congress in its wisdom may deem
best for the public good.â€

In determining these guarantees there is no
limit to the authority of the Government but
its own discretion. The rebel forces have sur-
rendered, but the Government has not laid down
its arms, and General Sheridan assures us that
it will be long before they can be safely relin-
quished. The right to defend its own exist-
ence against armed assailants, which is inherent
in the Constitution and in the nature of Gov-
ernment itself, authorized the Government to
wage war against the rebels, and the authority
to maintain its security by exacting guarantees
of defeated rebels is a necessary part of the
same inherent right. There was no express
verbal provision of the Constitution for emanci-
pation or for any other measure of war, nor
for the appointment of Provisional Governors
by the President. But the power of the Gov-
ernment is not limited by its enemies. Its
rightful action is not subject to their discretion.
Because they lay down their arms, they can
not compel the Government to connive at its
own subversion. The Union is restored, and
the rights of the States are resumed, not when
Alexander H. Stephens and the Copperheads
say so, but when the loyal people of the United
States in Congress assembled are content to de-
clare it.

That declaration should be made only after
the most careful investigation and reflection.
It is not surprising that the late insurgent
States should still seethe with angry passions.
It was to be expected that Union men would
still be hated and maltreated. It is natural
that men like Henry A. Wise should continue
to rave and swear at the Union, against which
they have so long plotted and declaimed. It is
not strange that conspicuous rebels should be
enthusiastically elected to the highest local
offices, and that men whose hands are still
trembling with the effort to overthrow the Gov-
ernment should insolently denounce those who
have maintained it at the most costly sacrifice
as enemies of the Constitution. It was above
all to be expected that the freedmen, whose
fidelity to the Union has been proved, should
be the victims of those whose war for slavery
has ended in emancipation.

All these things are natural phenomena of
the situation. There was no thoughtful man
who did not anticipate them, and only the fool-
ish are disappointed now that they are every
where apparent. But these phenomena are
contemplated without anger as without sur-
prise. They serve to admonish us all that the
conditions upon which States full of such a
spirit may resume their national relations must
be determined with great sagacity and pru-
dence. Great risks are of course to be taken.
That is the inevitable law of the situation.
â€œBring us back!â€ sneered Louis Wigfall in
the dark days of 1860, when the Senate cham-
ber, to which his comrades now again seek ad-
mission, rang with the contemptuous fury of
secession: â€œWhen you undertake that, and
have accomplished it, you may be like the man
who purchased the elephantâ€”you will find it
rather difficult to decide what you will do with
the animal.â€ None of us supposed that the
end of the war would solve all problems. The
question to be decided would plainly then be
the one which we are now reaching, whether,
the attempt of forcible secession having failed,
and the rebel States having resumed their re-
lations upon prescribed conditions, the controll-
ing majority of the American people would still
maintain the Government and the Union un-
der the constitutional forms, or permit it to be
subverted.

We have now, therefore, to decide under
what conditions that final and crucial experi-
ment shall be tried. Sooner or later the nor-
mal condition of the country must be restored,
and there is no conceivable method by which
the strain and friction of the trial that will fol-
low can be avoided. Certain conditions we
may see at once would be useless. General
disfranchisement, for instance, simply postpones
the experiment. Holding the suspended States
as conquered provinces, also, prolongs and com-
plicates, but does not obviate the peril. The
only rational solution of the problem is to con-
fide the experiment of a popular government
to its principle in such a way that it shall have
the fairest trial. Then, if it fails, it is not we
but human nature which is responsible. If the
lawfully-expressed will of the people of the
United States is that this Union shall end and
the Government dissolve, there is no further
alternative or appeal. But to ascertain this
will, to satisfy the conditions of the trial, the
whole people must be consulted. It will not
do to follow James M. Mason's advice to Vir-
ginia, and hang or shoot every man who votes
in a certain way, or Clingman's promise that
in North Carolina Union men should be hushed
by â€œthe swift attention of Vigilance Commit-
tees.â€

The risk that we undertook when we fought
to defend the Government and save the Union
was not, if we succeeded, to govern half of the
country as a subjugated province or colony
without national rights or representation, but
it was to trust the Union to the people of the
Union, some of whom hated it and had fought
against it, and would doubtless vote against it.
The less delay in the trial the better; for de-
lay endangers a just decision by breeding im-
patience among loyal citizens anxious to renew
their old activity and repair their fortunes.
The important element of the experiment was
thus evident. It was the late slave population.
The war had made them freemen and citizens.
If the old order of the national system were
restored, and they were not consulted, and the
Government were embarrassed or ruined by
an alliance of the late rebels with the Copper-
heads, the experiment of a popular govern-
ment would be as far from satisfactory solution
as ever. It can be satisfactorily tried only by
an equality of electoral right among the whole
population. The experiment is not satisfac-
torily tried evidently if 631,000 citizens, as in
North Carolina, are invested with political pow-
er to the exclusion of 331,000 who have the
same qualifications except color; or if, as in
Virginia, 719,000 may exclude 533,000; or, as
in Alabama, 596,000 may exclude 437,000; or,
in Georgia, 591,000 may exclude 465,000; or,
in Louisiana, 357,000 may exclude 350,000;
or, in Mississippi, 353,000 may exclude 436,000;
or, in South Carolina, 291,000 may exclude
411,000.

Under the circumstances of the case, as we
have defined them, this electoral equality may
be secured either directly or indirectly. Con-
gress may, as a measure of national security,
determine who shall vote, either by express
specification or by sanctioning the provisions
of a State Constitution, and guarding against
its unfair operation. This is obviously a pure-
ly exceptional measure. In the normal opera-
tion of our system the regulation of suffrage is
left to the States, and it would be touched by the
National Government in this instance for the
same reason that property in slaves was touched
â€”for the public safety. The right of a State
to regulate suffrage is no more sacred than that
of a property holder to his property. The Con-
stitution protects neither when in extreme na-
tional peril its sacrifice becomes necessary.
Congress has chosen, and we think wisely, to
leave the regulation of the suffrage to the State,
but proposes to reduce the basis of representa-
tion in proportion to the number of male adults
disfranchised except for rebellion. The reason
for proposing this rather than directly estab-
lishing impartial suffrage is purely one of ex-
pediency. It saves friction.

This is the substance of the amendment sug-
gested by the Committee of Reconstruction.
This enables us to meet the inevitable risk in
the safest way. This, also, undoubtedly com-
mends itself to every loyal man in the country.
This is the logical completion of the measures
already taken. And when this has become a
part of the fundamental law, then, with an ex-
ecutive which will honestly defend the equal
civil rights of all citizens, and confide the na-
tional offices to hands which have always faith-
fully upheld the nation, we shall be ready to
encounter the sharpest peril to which a popular
system of government has ever been exposed. 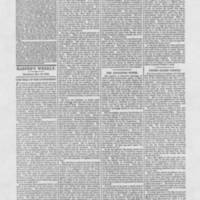