This article was published on August 19, 1865 by Harper’s Weekly, a Republican newspaper, to share its opinions on the Reconstruction efforts in North Carolina with a broad audience. This article detailed the evil of the principle of state sovereignty and how Confederates used this argument to justify their cause. The article stated that white Southerners used it as an excuse for slavery and the repression of blacks. It referred to those who believed in state sovereignty over national sovereignty as ignorant men, who stood in the way of progress. It referred to state sovereignty as the doctrine that would ruin the United States. Harper’s Weekly argued that the method which would allow the most success and protection for all citizens was the belief in national sovereignty. The article highlights the argument of states’ rights versus national authority that continued throughout Reconstruction.

When Governor Holden, Provisional Gov-
ernor of the United States for the State of
North Carolina, says that he does not think
Union men will be â€œpunishedâ€ in that State,
what does such an extraordinary expression
mean? When the Northern allies of the late
rebels declare that, having laid down their arms,
every State lately in rebellion has as good a
right to send representatives to Congress with-
out condition or inquiry as the loyal Statesâ€”
what do they mean? What does the total ab-
sence in the rebel States of any disposition but
that of sullen acquiescence signify?

All such things mean simply that the great
struggle has merely changed its form, not its
essence. It is a contest between the spirit of
equal rights and of privilege. The form is a
struggle between Nationality and State Sover-
eignty; and this contest is not yet settled.
The people of the United States have to meet
this year exactly the same spirit that they met
last year. They have to fight it now as earnest-
ly as they fought it then. The field only, not
the fight, has changed.

Meanwhile we are glad to record the great
advantages which the people and a truly popu-
lar government have gained over the enemy.
In a struggle which is in its very nature long
and fluctuating it is cheering to have reached a
point of such positive progress as we have now
attained. All we ask is that in our exultation
we do not recede: that we do not misconceive
the real nature of our advantage and fatally as-
sume it to be a final victory.

The doctrine of State Sovereignty, which would
be the present ruin of the United States, of civil
liberty, and of civilization, has been for thirty
years and more aiming to engross the Govern-
ment. It has had more able and resolute lead-
ers and a more stupid and superstitious follow-
ing than any other policy in our history. The
ingenuity and persistence with which this dogma
of State Sovereignty attacked and sought to de-
stroy the fundamental principles of the National
Government give our political history its pro-
foundest interest. This dogma was pure re-
action. It was the protest of aristocracy and
the Middle Ages against democracy and a new
era. And the struggle was so skillfully con-
ducted that at length the peaceable overthrow
of the Union seemed to be a foregone conclu-
sion.

The State Sovereignty leaders, making the
discussion of slavery their excuse, felt them-
selves strong enough in 1860 to force a conclu-
sion. They were sure they could do one of two
things. They could either terrify the demoral-
ized country into submission to their termsâ€”or
by withdrawing from the Union they could com-
pel reconstruction upon their own conditions.
By all apparent logic they were right. The
condition of the country seemed to justify their
conclusion. The doom of the Union was sealed
in the estimation of the shrewdest observers.

But great criminals never allow for moral
causes. Accustomed to believe men to be gov-
erned by the basest selfishness, they found all
their calculations upon meanness and coward-
ice and habit, forgetting those extraordinary
impulses which are to nations what the inspira-
tions of mortal peril are to individuals. Count-
ing only upon the tame servility of a control-
ling majority of the country as it had been re-
vealed in the conduct of such men as Isaac
Toucey, James Buchanan, Franklin Pierce,
William B. Reed, Vallandigham, and the
Woods, with the party of which they were
leaders, and upon the tone of the press of the
same partyâ€”relying further and confidently
upon the position taken by the New York Trib-
une, the recognized organ of the radical section
of the Republican party, from which alone op-
position was to be feared, and upon the plain
terror of the conservative section of the Repub-
licans, as displayed by the Albany Evening Jour-
nal, the State Sovereignty leaders were perfect-
ly sure of their success, and with appalling rea-
son. Drunk and defiant they fired. The shot
scattered the cloud which had obscured the
heart of the nation from itself and from the
world. It saw in the flash of the gun all the
fearful consequences of yielding. It felt such
a lifting of noble emotion as this generation had
not known. The unexpected and incalculable
love of country appeared like the long-hidden
regicide to the villagers in the savage skirmish
in the Connecticut Valley, and led a nation to
victory.

The State Sovereignty leaders made a fearful
mistake, and they now see it. They now see
that they foolishly abandoned the method by
which alone they could hope for success. And
what do they now propose? To return to that
method; to continue the effort; to retrieve the
disasters of battle by the force of the ballot.
Sore and raging with defeat, they intend, if
they can, to enter Congress â€œstanch and true
Southern men,â€ and to resume the work within
the Union which they suspended in 1860-'61 in
their attempt to break out of it.

That they are in the least changed in political
opinion nobody is fool-hardy enough to contend.
They are only soured by the total failure of the
war. That they are weakened is true; but their
prestige at home is not lost, and a large party
in the country is ready to unite with them in
their policy as they agree with them in political
views. And the exact point of danger is this:
Emancipation will give to the Congressional
representation of the eleven rebel States in the
year 1870 an increase of nineteen members.
Let these be elected by the late rebels in those
States, and they will need only twenty-eight
members from the rest of the country to place
the Government of the United States in the
hands of its bitterest enemies. The State of
New York alone could supply those members.

This is a very plain and simple purpose. The
long training and cherished tradition of an
ignorant people whose passions are inflamed by
skillful and designing leaders are not extin-
guished in one unsuccessful struggle. The
American who supposes this civil contest to be
ended because Lee surrendered to Grant at
Appomattox Court House is as wise as the En-
glishman who should have supposed the civil
war in England to end with the return of
Charles II. We have reached a certain peri-
od in the struggleâ€”that is all. It ascends from
the battle-field to the Legislature; but it is the
same combat and of the same scope. And what
we beg thoughtful men to remember is, that
what was gained in the field may be lost in the
chamber. The men who could not shoot us
down may wheedle and fatigue and outwit us
into submission.

The amiable twaddle about conciliation is
therefore either folly or knavery. It is folly if
it springs from a conviction that the Govern-
ment is in no peril from the defeated rebels.
It is knavery if it be merely a renewal of the old
tactics. When the intentions of â€œthe Southâ€
â€”speaking politicallyâ€”were the blackest, we
heard the most of their merely asking for their
rights and of the Northern exasperation of our
Southern brethren. We were exhorted to for-
bearance, to conciliation, to fraternity; and
while we were taught to relax our hands they
clutched our throats. Is it wise to be twice
snared in the same trap?

For ourselves we have no wish to sneer or
exultâ€”certainly none to misrepresent. But as
we believe much of the guilt of the war rests
upon those who prevaricated and cajoled instead
of speaking plainly, we hope to avoid any simi-
lar responsibility in the future. This paper cir-
culates widely in the late rebel region. It is
read by many who do not love the Government
or the Union. We say to them frankly that
the people of the country have, in our judg-
ment, paid too costly a price for their victory
to surrender it easily. We believe it will be
found that Congress, freshly representing them,
is resolved that no State shall be reorganized
except upon conditions which promise peace by
intrusting the political power, according to the
principle of our Government, to the whole adult
male population. To confirm this purpose is
our aim. We are for the Union and Govern-
ment of the United States. We supported them
against the arms of their enemies in war. We
shall support them against the wiles of their
enemies in peace. We have no wish to con-
ciliate those enemies. We hope to conquer
them fairly and forever, whether at the can-
non's mouth or the ballot-box. 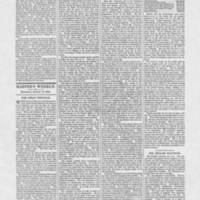