Rittenhouse Baird submitted his claim on February 14, 1878. He was 63 years old at the time. He lived on Watauga River in Watauga County North Carolina. During the war, he supported the Union army by protecting some of the soldiers that were fleeing captivity by the rebel army. One man in particular was W. R. Shull who was sentenced to be shot by the confederacy around 1863. Baird signed a petition and hid the soldier in his home, putting himself in danger. The confederacy ended up not carrying out the sentence. Other topics he discusses within his claim are secession, relatives fighting for confederacy, and the help he provided the Union army.

I aided one who I was well acquainted with by the name of W. R. Shull. I signed a petition and used all the influence I could and helped to prevent the Rebel army from shooting him, and they did not carry out their sentence.
â€¦I was glad to hear of the final surrender of the confederate.
I was threatened by the Rebel Armyâ€¦they threatened of burning the house up, attempted to put find under my beds, but was prevented at last from burning my property up. This was about the year 1864. 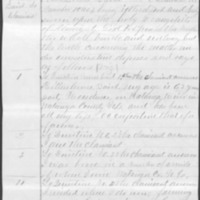