The Fayetteville Observer, was an anti-secession newspaper, that is reported on the secession movement at Wilmington, NC. The author is critizing the hasty and rash movement made by the people on the coast. The Observer reflected what many North Carolinians, thought about the call for secession. It was thought throughout the state that an agreement could be reached without seceding from the Federal Government. The actions taken by South Carolina and other states were rash, and uncalled for.

Among the speeches noticed by the Herald, was one by Robert strange, Esq., who argued, as the Herald understands Him, that a seceding State has a right to take the forts and other government property within its limits or on its coast; and that the present Union was based on the principle of secession, â€œinsomuch as the nine State which adopted the Constitution had seceded from the old confederation, and set up a new government, leaving North Carolina to come in or stay out as she liked.â€
In our Opinion, a State has as much right to take the forts as it has to secede, -no more and no less,- simply the right of revolution. There could scarcely be a more preposterous claim than this, that after the United States had bought from South Carolina and improved it at an immense expense, south Carolina Should have a right to take it back, without the consent of the United States.
As to the old Confederation, the states had found the agreement, originally made, called â€˜a Confederation,â€ totally inefficient, they all admitted this and they all met together in convention under the call of Congress to make a new agreementâ€”â€œto form a more prefect Union.â€ There was no secession, nor anything like secession, by one state or by nine States, The same process may be gone through with now, this difference: that whereas each State then had the right to ratify or reject and be in or out as it chose. Now a ratification of a change by three-fourths is binding upon the whole. 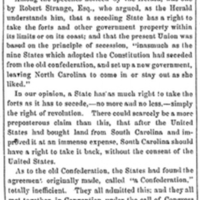