Political Cartoonist Norman Jennett drafted this particulary vicious image in June of 1900. An African-American vampire is shown terrorizing the white citizens (including several vulnerable white women) before him. The message on his wings “Negro Rule” and the fusion ballot box on which he stands both suggest that the political power held by African Americans was a danger to white society. It is nearly identical in content and style to another cartoon “"The Vampire that Hovers Over North Carolina (Negro Rule)," printed in the News and Observer in September 27, 1898. During both the 1898 and 1900 campaigns, the Democrats successfully wielded white supremacist ideology (which is readily apparent in this image) in order to achieve electoral victory. Cartoons, such as this one, represented one method for spreading this message and winning white voters to the cause of white supremacy. 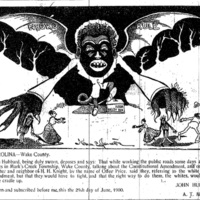