This cartoon, which was created by Norman Ethre Jennett for inclusion in the Democratic newspaper the Raleigh News and Observer, depicts a group of African Americans engaged in a violent attack on white registrars. In the foreground is a caricatured sketch of Abe Middleton, a prominent African-American political figure who had previously served as a County Chairman for the Republican Party. Behind him, a white man labeled as a registrar is hanging from a tree. A second registrar is being beaten by two black men while a third attempts to flee the scene, only to be shot by a third black assailant. This theme of electoral violence was illustrated by Jennett on several different occasions, often with warning captions, like the one included here, which blames the imagined scenes on the actions of Fusion leaders who fail to support the Democratic Party’s policy of white supremacy.

This is the situation that we would have if the incendiary advice that Knight of Wake, Gill of Vance, McNeill of Wilkes, and other Fusion leaders are giving, should be followed by the Negroes. 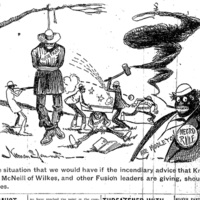