This cartoon is one of several Norman Jennett drawings from the Raleigh News and Observer which depicted African Americans violently attacking registrars. In this scene two black men of exaggerated height beat three smaller white registrars with sticks. The potential for further violence is suggested by the gun and razor blade sticking out of the men’s respective pockets. In the background a white figure labeled Knight instigates the attack by telling the men to “while them over the head.” Below this scene is the testimony of another white man (Charles T. Hester) who claimed to hear H.H. Knight speak these words in his (Knight’s) store. Josephus Daniels, editor of the News and Observer, and Jennett used this incident to call up the threat of racial violence that could result from the actions of Populists and Republicans who failed to support the cause of white supremacy and stirred up trouble among the African-American populace.

AS FUSIONISTS THINK IT WILL BE.

Incendiary Advice Given to Negroes by a Fusion Black and Tan Leader.

Charles T. Hester being duly sworn says that he had a conversation with H.H. Knight at Knight's Store, in St. Matthew's Township, Wake County, in which Knight said that the way the election law was now the Republicans and negroes would have TO STAND OVER THE BALLOT BOXES AND WHALE THE REGISTRARS AND POLL-HOLDERS OVER THEIR HEADS WITH STICKS in order to get the Correct count at the election.

SWorn and subscribed before me this 23rd day of June 1900

Justic of the Peace 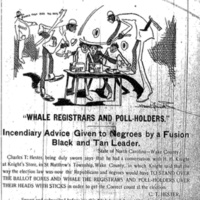