From Proslavery to Secession

From Proslavery to Secession

This document helps place the arguments concerning slavery into a national context.

As late as 1830, southern whites still sometimes debated whether slavery should, or could, be eliminated. The state of Virginia nearly abolished slavery in 1836, after the terror of Nat Turner’s Rebellion. In North Carolina, people wondered privately whether and how slavery might one day be gotten rid of. When Judge Willam Gaston delivered the commencement address at UNC in 1832, he said that slavery was holding back the progress of the state:

"Disguise the truth as we may, and throw the     blame where we will, it is Slavery which, more than any other cause, keeps us back in the career of improvement. It stifles industry and represses enterprize — it is fatal to economy and providence--it discourages skill — impairs our strength as a community, and poisons morals at the fountain head. How this evil is to be encountered, how subdued, is indeed a difficult and delicate enquiry, which this is not the time to examine, nor the occasion to discuss. I felt, however, that I could not discharge my duty, without referring to this subject, as one which ought to engage the prudence moderation and firmness of those who, sooner or later, must act decisively upon it."

Not only was there no outcry against Gaston, but his speech went through five printings. But by the 1850s, a book arguing that slavery was bad for the South was publicly burned, and the suggestion that slavery should not be allowed to expand into the western territories was enough to get a UNC professor fired. Across the South, people suspected of being abolitionists faced threats of mob violence. What happened in the span of a generation to make white North Carolinians ready to defend slavery with violence — and ultimately by seceding from the Union?

First, after the slave uprisings of the early nineteenth century, in both the United States and the Caribbean, white southerners decided that there was no way that their slaves, once freed, could continue to live among them. The only way slavery might be ended was if the slaves could be sent “back” to Africa — an idea that had broad support, but was hopelessly impractical. Instead, whites found they had to tighten “black codes” to keep their dominance. As Thomas Jefferson famously wrote in 1820, “We have the wolf by the ear, and we can neither hold him, nor safely let him go.”

Meanwhile, abolitionists in the North had begun organizing against slavery in the 1830s. At first they were derided in both North and South, but gradually they won converts in the North. Southerners, though, took their attacks on slavery as attacks on the southern culture and way of life — on the entire South. Honor demanded that white southerners — even poor whites, who didn’t necessarily think much of wealthy slaveholders and thought far less of slaves — rally to the defense of their homeland.

North and South were growing apart culturally and economically, and southnerners angered by abolitionists’ attacks didn’t like what they saw across the Mason-Dixon line. While the South was as much as ever an agrarian region, its economy and culture defined by agriculture, the North was beginning to industrialize. Northern cities teemed with immigrants, many of them Catholic, and many native-born Americans in both North and South saw these immigrants as a threat to democratic institutions. White southerners saw the North as a land of radical change and radical ideas — not a region whose people had any business criticizing southerners.

More important, as abolitionism gained support in the North in the 1850s, white southerners feared that abolitionists would incite slaves to violent rebellion. Abolitionism was, as the saying goes, yelling “fire” in a crowded theater. Southern states banned abolitionist literature and enforced the bans formally with fines and prison sentences and informally with mob violence.

The growth of democracy itself also played a role in strengthening white southerners’ defense of slavery. By the 1830s, it was becoming an article of faith in the United States that all white men, at least, were created equal. By 1860, only five states limited voting to taxpayers, and only two required property ownership for voting. Many states were also eliminating property requirements for holding office. In the eighteenth century slavery had been at one end of a continuum of free and unfree labor, but by the middle of the nineteenth century American society was starkly divided. If all white men were free and equal, then all blacks, logically, were — or should be — unfree. Educated men made this argument in philosophical terms, while poor whites eagerly grasped their new status in southern society.

Finally, despite the brutalities of slavery and the ban on importing new slaves from Africa, the number of slaves in the United States was growing. Slaveholders treated their slaves well enough to keep them productive and healthy enough to have children. More slaves meant more money for slaveholders, but some areas, such as the northeastern counties of North Carolina, faced the threat of black majorities. Whites already fearful of slave revolts did not relish finding themselves in the minority.

As long as new land was available in the West, slaveholders could sell their extra slaves to new plantations in the territories. But as the “Old Southwest” — Alabama, Mississippi, and Arkansas — started to fill up, slaveholders needed new territory. In the 1840s, the United States annexed Texas and fought a war with Mexico — in large part, to gain more territory for slavery.

Southerners’ desires to expand slavery into these new territories, though, drew northern opposition. Northerners might not care much if southerners owned slaves, but they didn’t want slave labor competing with their own free labor — nor did they want large numbers of African Americans being brought north and west. First through the Free Soil Party, then through the Republican Party, northerners fought the expansion of slavery. That opposition, in turn, drew more southern arguments, legal and philosophical, justifying slavery and its expansion.

Until the 1850s most northerners had turned a blind eye to slavery, but now they came face to face with its evils. The Fugitive Slave Act of 1850 brought slave-catchers into northern communities, and the publication of slave narratives and books like Uncle Tom’s Cabin captured northerners’ imaginations.

But the more harshly northerners argued against slavery, the more vigorously white southerners dug in and defended it. And the more vigorously white southerners defended it, the more strongly northerners opposed the “slave power” in the U.S. Senate, where southern states still held half the seats. By the late 1850s, the two regions were becoming polarized, and the South was ready to consider seriously the idea of secession. 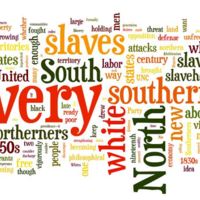