The author of this article from the Raleigh News and Observer attempted to rally whites to the cause of white supremacy by warning them that a number of African Americans were attempting to vote illegally in the upcoming election. He cited the federal prosecution of a Winston registrar who refused to let supposedly ineligible voters register as evidence of the necessity of the proposed Suffrage Amendment “to put an end to negro and Federal domination.” He called on registrars to stand firm against men like Republican Chairman A.E. Holton as well as federal officials in order to ensure that underage blacks as well as those who had lived in the state for less than the required twelve months (two groups who presumably would not look favorably on the amendment) were not allowed to register.

The farce of a trial of a white registrar in Winston, inaugurated by Federal office-holders is an attempt to bulldoze with Republican methods in the South. They always rush to the Federal courts for assistance in their local affairs. The trial in Winston is one more reason why voters should favor the amendment - to put an end to negro and Federal domination.

Unless registrars stand firm, the Black-and-Tan gang will have every negro boy on the books and secure the registration of ten thousand South Carolina and Virginia darkeys as they did in 1896. The Federal prosecution "bluff" will not scare any Democrat. It will be thrown out of court when it gets into courts not under the domination of Holton and Blackburn.

The Charlotte Observer says that "more than five hundred negroes in Charlotte township, when asked by the list takers if they had made tax returns a year ago, stated that they had not made such returns, and a great many of these gave, as their reason, the assertion that they had come to this township from South Carolina since the first of January. Others said the had come to Charlotte since last September and October." These negroes are now trying to register and Holton is backing them up in it.

Let White Folks stand firm and all will be well! No negro boy and no negro who has not resided in the State twelve months must be permitted to vote! 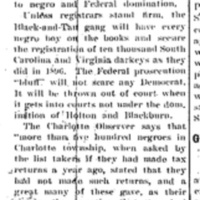