This book discusses several key issues concerning the Christian viewpoints of African Americans during the time of slavery and the Civil War. While it is small, Daniel L. Fountain, its author, provides historians with a good secondary perspective concerning different aspects of the slave church and different religious perspectives, among other topics. Ultimately, Fountain poses the following question, "Did Christianity lead to freedom or did freedom lead to Christianity?"

William E. Mongomery's fine study of the African American church in the postbellum South informs readers that nineteenth-century whites often condescendingly described black worship as "long on religion and short on Christianity." Such a statement reflects the general contempt that most white Christians held for the animated worship services of many African American churches. In contrast to this negative view, I embrace this phrase as a means of encouraging others to consider alternative interpretations about the degree of Christianity that existed within the antebellum slave community. More precisely, my research into slave religious practices has forced me to consider the possibility that while most nineteenth-century African American slaves had some form of religious belief, they were not Christians. Emancipation provided African Americans far more incentive and opportunities to convert to Christianity than ever existed under slavery. In outlining the evidence to support such an argument, I join a growing list of scholars such as Allan D. Austin, Sylviane A. Diouf, Michael A. Gomez, Yvonne P. Chireau, Joseph M. Murphy, and Anthony B. Pinn, all of whom emphasize the existence of religious diversity among the past and present African American population of the United States. This emerging trend flows against the tremendous current of African American religious historiography that concentrates heavily on the role of Christianity within the black community. Not surprisingly, then, the speculative argument presented here raises questions about some of the most widely accepted interpretations about the role of religion within the slave community.
A strong body of literature describes how during slavery, elements of African Traditional Religion merged with Christianity to create a uniquely African American form of the Christian faith. The works of Albert J. Raboteau, Mechal Sobel, and Margaret Washington Creel represent some of the most detailed research that describes the emergence and growth of Afro-Christianity. Their scholarship shows that West African religions contain many beliefs similar to those characterizing the evangelical Christianity that dominated the antebellum southern United States. Among them, both African Traditional Religion and evangelical Christianity emphasize a single creator God, symbolic death and rebirth, water as a spiritual symbol, blood sacrifice, religious prayer and song, and belief in an afterlife.
According to most interpretations of nineteenth-century slave religion, these similarities facilitated the conversion of slaves to Christianity by allowing them to incorporate familiar beliefs into their New World environment. This confluence resulted in a slave-created form of Christianity that reflected American as well as European Christian ideals. Mechal Sobel's study of Afro-Baptists provides excellent descriptions of how and why this religious blending or syncretism took place within the southern slave community. For example, Sobel convincingly argues that the Baptist practice of baptismal immersion made that denomination more attractive for African Americans whose ancestors viewed water as a part of the spirit world. Thus, slaves baptized into the regions' Baptist churches probably viewed the ritual not only as an expression of their Christian faith but as an opportunity to commune physically with their heavenly creator. In doing so, African Americans understood and experienced Christianity quite differently from their white brethren and subsequently constituted a consciously unique religious community. 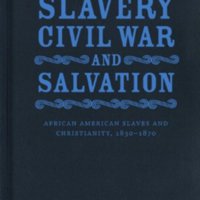