In this article, the Democratic Raleigh News and Observer attacked Populist Marion Butler for his lack of commitment to white supremacy. The article appeared during the campaign of 1900 during which the Democratic Party sought to secure not only Butler’s Senate seat but also the passage of a Suffrage Amendment which would effectively disenfranchise African Americans. The article claimed that Butler was being misleading when he claimed that the amendment would disfranchise white men alongside black men and that a recent incident in which the Senator thought a mullato boy was white demonstrated his true allegiances. The article argues that by remaining in alliance with the black Republican Party so long, Butler (and other Populists) have become “color blind” proponents of a “political miscegenation” which had to be stopped at all costs.

Marion Butler in his reaching out for the sensational rather over did the thing in Morganton on Saturday. He was trying to make the white people believe that the Amendment would disfranchise them. After finishing [?] that false argument he started out to tell them it would disfranchise their children, and as an object lesson called by a boy about ten years old and sat him on a table and began to mourn that the wicked Democrats were going to deny the ballot to such white boys. And his object lesson sitting on the table was a mulatto!!!

When some one in the crow proclaimed that it was a child with negro blood that Butler was lamenting about, it broke up all the wily Senator's sanctimonious love for "the poor bare-footed white boy" and he unconsiously had exposed the truth that he is going about the State as an evangel of the negro and the mulatto! As the truth downed upon him Butler doubtless thought concerning himself:

He digged a pit.

He digged it deep.

He digged it for his brother.

To punish his sin

He did fall in

The pit he differ for t'other.

When the Populist party was first organized it was a white man's party and so proclaimed itself. As such it grew to number 48,000 voters. Then it fused the the negro party and its membership began to fall off. It joined with the Republicans in putting one thousand negroes in office, and lost more than half its members. It then fought the elimination of the negro from politics in order to retain his vote, and lost the confidence of half the remainder of its voters. When its leaders carry the remainder up to the polls to vote against the Amendment, the last vestige of the Populist party will have been swallowed up by the Republican party.

"Coming events cast their shadows before." Already, having so long fused and co-operated with negroes and helped to put them in office, the Populist leader becomes color blind and has set up a mulatto child as the type of the individual for which he is battling in North Carolina as we had from 1895 until the White Supremacy Revolution in 1899. It was to put an end to such political miscegenation that the people rose up in their might two years ago and declared they would have government by Anglo Saxons without the intermixture of any other race and without the aid or consent of the African race.

The white man who votes with the negro is sure to become color blind, politically, sooner or later. When Butler returned from college to the White Supremacy county of Sampson in 1885 and purchased the Caucasion, a Democratic paper, he could tell the difference between a white child and a mulatto as far as his eye could reach. When he began to trade and dicker with negroes for office, his political eyesight began to fail, and so rapidly has it failed, that politically he cannot tell the difference between a white man and a mulatto, and his color blindness reached the climax when he used a mulatto child to illustrate his undying love for the "bare-footed white boy." By mistake he stumbled into a true declaration of what he stands for in politcs, a mixed government by some whites and some negroes, a mulatto government. 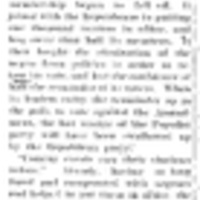