Ironically the central government that the states seceded to was more powerful than the one they had left, putting to rest the argument that they had left for states rights. The ideology of southerners began to split during the war, as poorer agrarians started to resent the wealthy, and southern leaders started to clash over the direction of the new country. This led to internal strife that caused the end of the Confederacy. Desertion because a huge problem during the war, but Bearman argues it was not individual problems that led men to leave, it was the unity they found within their own companies. They formed bonds, and when they felt that their services had been used up or they could no longer support the war, not just one but multiple people left at once. Most of the Confederate soldiers in North Carolina had little to fight for, so when things got rough, they left. Unlike modern military that tries to reduce ties to civil society, the armies of the Confederacy recruited and maintained entire groups of men from one county, meaning they all knew of each other, making solidarity and thus desertion all the more likely.

Drawing from the experiences of 3,126 enlisted men from North Carolina who fought for the Confederacy in the Civil War, the author focuses on the determinants of desertion. Men deserted because their identity as Southerners was eroded by an emergent localism, sustained and organized within the Confederate army. Desertion rates were highest in companies that evidenced a high degree of local homogeneity; company solidarity thus bred rather than reduced desertion rates. There is no support for any of the historical models of desertion that search for individual-level determinants, such as social class, occupation, status, family structure, age, or time of enlistment. Finally, contextual variables seem to be weak proxies for the central variable accounting for desertion: the emergence of a localist identity.

"Mother there is soldiers deserting everyday and I hope they will continue to desert until this war has ended." Private T.W. Gaither, April 3, 1863 (Hardy n.d.) 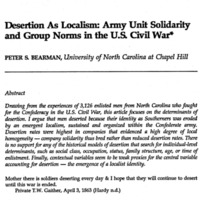