Richard Reid "A Testcase of the 'Crying Evil': Desertion Among North Carolina Troops During the Civil War" (1981)

Richard Reid "A Testcase of the 'Crying Evil': Desertion Among North Carolina Troops During the Civil War" (1981)

This is quantitative analysis of North Carolina troops desertion. Reid argues that the assumption that troops from North Carolina were more prone to desertion is not a fair assessment, especially since more Confederate troops came from and died from North Carolina than any other. The absence of clear, reliable evidence is proof that the desertion numbers may be higher than estimated, and fair judgment should be used when using data regarding the desertion from North Carolina. Reid states that the loyalty of the troops from North Carolina was no less than those from any other state, and most left to protect their families from brigands and Union troops. These men would return to their units as soon as they felt that their family was safe enough for them to do so. There is also writing on what the definition of desertion is, and how it is different from being AWOL (away without leave). During the Civil War, the definition of desertion was not clear-cut, so there were men that were unfairly listed as deserters when they were actually not, and were very loyal soldiers. He claims that sickness and absence had a greater impact than desertion.

A major problem that faced both armies during the Civil war was desertion. As the conflict dragged on into a protracted war of attrition, the loss of men through absenteeism struck hardest at the South. Before the end of 1861 it had become a problem and by 1965 it was endemic in all of the southern armies. Confederate generals and civilian officials believed that absenteeism had robbed the South of important victories. By the last months of the war the armies were melting away. While a good deal has been written on the subject, and broad estimates have been made concerning the numbers of deserter in the South, the exact number on men who deserted can probably never be known.
...
The most damning evidence against the state's [North Carolina] soldiers has long been the report of the provost marshel general, which records the number of deserters from North Carolina as 23,694, almost one quarter of the total Confederate desertions of 103,400...Historians have used these figures to argue that North Carolina's soldiers deserted at a much faster rate than did those from any other state. However, even a brief examination of the statistics in the report shows that it cannot be used to support such an argument. The report was compiled from "incomplete returns," returns which however are clearly more complete for North Carolina than for other states. 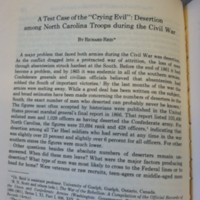