In 1892 Homer Plessy challenged a 1890 law by the Louisiana General Assembly which required white and nonwhite passengers to ride in separate railway carriages. Plessy, a light-skinned man, argued that the law was null and void because race could not always be determined by appearances. Plessy was arrested for violating the statute and the case was tried before the Louisiana Supreme Court. The court upheld the law and, in 1896 Plessy petitioned for the United States Supreme Court for a writ of error which would overturn the state court's ruling. Justice Brown for the majority opinion, however, ruled that the statute did not violate the Fourteenth Amendment to the U.S. Constitution and that separate accommodations could be required as long as they were "equal." Justice Harlan wrote a dissenting opinion in which he argued that any arbitrary separation of citizens based on race could never be constitutional and would only lead to increased racial tension in the United States.

MR. JUSTICE BROWN, after stating the case, delivered the opinion of the court.

This case turns upon the constitutionality of an act of the General Assembly of the State of Louisiana, passed in 1890, providing for separate railway carriages for the white and colored races. Acts 1890, No. 111, p. 152.

The first section of the statute enacts "that all railway companies carrying passengers in their coaches in this State, shall provide equal but separate accommodations for the white, and colored races, by providing two or more passenger coaches for each passenger train, or by dividing the passenger coaches by a partition so as to secure separate accommodations: Provided, That this section shall not be construed to apply to street railroads. No person or persons, shall be admitted to occupy seats in coaches, other than, the ones, assigned, to them on account of the race they belong to.â€

â€¦The information filed in the criminal District Court charged in substance that Plessy, being a passenger between two stations within the State of Louisiana, was assigned by officers of the company to the coach used for the race to which he belonged, but he insisted upon going into a coach used by the race to which he did not belong. Neither in the information nor plea was his particular race or color averred.

The petition for the writ of prohibition averred that petitioner was seven eighths Caucasian and one eighth African blood; that the mixture of colored blood was not discernible in him, and that he was entitled to every right, privilege and immunity secured to citizens of the United States of the white race; and that, upon such theory, he took possession of a vacant seat in a coach where passengers of the white race were accommodated, and was ordered by the conductor to vacate said coach and take a seat in another assigned to persons of the colored race, and having refused to comply with such demand he was forcibly ejected with the aid of a police officer, and imprisoned in the parish jail to answer a charge of having violated the above act.

The constitutionality of this act is attacked upon the ground that it conflicts both with the Thirteenth Amendment of the Constitution, abolishing slavery, and the Fourteenth Amendment, which prohibits certain restrictive legislation on the part of the States...

So far, then, as a conflict with the Fourteenth Amendment is concerned, the case reduces itself to the question whether the statute of Louisiana is a reasonable regulation, and with respect to this there must necessarily be a large discretion on the part of the legislature. In determining the question of reasonableness it is at liberty to act with reference to the established usages, customs and traditions of the people, and with a view to the promotion of their comfort, and the preservation of the public peace and good order. Gauged by this standard, we cannot say that a law which authorizes or even requires the separation of the two races in public conveyances is unreasonable, or more obnoxious to the Fourteenth Amendment than the acts of Congress requiring separate schools for colored children in the District of Columbia, the constitution ality of which does not seem to have been questioned, or the corresponding acts of state legislatures.

We consider the underlying fallacy of the plaintiff's argument to consist in the assumption that the enforced separation of the two races stamps the colored race with a badge of inferiority. If this be so, it is not by reason of anything found in the act, but solely because the colored race chooses to put that construction upon it. The argument necessarily assumes that if, as has been more than once the case, and is not unlikely to be so again, the colored race should become the dominant power in the state legislature, and should enact a law in precisely similar terms, it would thereby relegate the white race to an inferior position. We imagine that the white race, at least, would not acquiesce in this assumption. The argument also assumes that social prejudices may be overcome by legislation, and that equal rights cannot be secured to the negro except by an enforced commingling of the two races. We cannot accept this proposition. HN11 If the two races are to meet upon terms of social equality, it must be the result of natural affinities, a mutual appreciation of each other's merits and a voluntary consent of individuals. As was said by the Court of Appeals of New York in People v. Gallagher, 93 N.Y. 438, 448, "this end can neither be accomplished nor promoted by laws which conflict with the general sentiment of the community upon whom they are designed to operate. When the government, therefore, has secured to each of its citizens equal rights before the law and equal opportunities for improvement and progress, it has accomplished the end for which it was organized and performed all of the functions respecting social advantages with which it is endowed." Legislation is powerless to eradicate racial instincts or to abolish distinctions based upon physical differences, and the attempt to do so can only result in accentuating the difficulties of the present situation. If the civil and political rights of both races be equal one cannot be inferior to the other civilly or politically. If one race be inferior to the other socially, the Constitution of the United States cannot put them upon the same plane.

It is true that the question of the proportion of colored blood necessary to constitute a colored person, as distinguished from a white person, is one upon which there is a difference of opinion in the different States, some holding that any visible admixture of black blood stamps the person as belonging to the colored race, (State v. Chavers, 5 Jones, [N.C.] 1, p. 11); others that it depends upon the preponderance of blood, ( Gray v. State, 4 Ohio, 353; Monroe v. Collins, 17 Ohio St. 665); and still others that the predominance of white blood must only be in the proportion of three fourths. ( People v. Dean, 14 Michigan, 406; Jones v. Commonwealth, 80 Virginia, 538.) But these are question to be determined under the laws of each State and are not properly put in issue in this case. Under the allegations of his petition it may undoubtedly become a question of importance whether, under the laws of Louisiana, the petitioner belongs to the white or colored race.

The judgment of the court below is, therefore,
Affirmed. 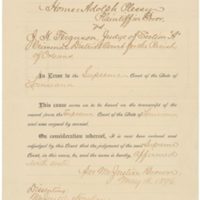