James Sprunt, purser of the Mary Celestia, describes what it was like coming into the mouth of the Cape Fear by way of the New Inlet. He tells of what circumstances the crew was up against as they were being chased by a Union blockader and their pilot, John Anderson was very ill.

At last the critical hour arrived, when, in the uncertain light of the dawn, they found that they had run near a blockader and had been see by her. The blockader opened fire on the Mary Celeste and pursued her. Like a seared greyhound she made straight for New Inlet bar, then visible several miles away, and after her steamed the blockader, from whose bow gun every few minutes would leap a flame followed by a shell which would ass over her or through her rigging and burst into the air, or, striking the sea, would flash a great column of spray towards the sky. By this time poor Anderson was dying in his berth, and the officers of the ship began to realize the terrible situation in which they found themselves, with the enemy in pursuit and before them a bar over which it was almost certain destruction for any one aboard except Anderson to steer the Mary Celeste. Anderson heard the firing and knew what it meant before they told him. He knew too, that he was dying and had no further interest in this world's affairs, but the sense of duty asserted itself even in the presence of death.

He was too weak to go up, but he demanded to be taken on deck and carried to the man at the wheel. Two strong sailors lifted him up to the wheelhouse. They stood him on his feet and supported him on either side. His face was as yellow as gold, and his eyes shown like stars. He fixed his unearthly gaze upon the dim line of pines that stood higher than the surrounding forest, then at the compass for a moment and said calmly, "Hard starboard." Quickly revolved the wheel under the hands of the helmsman; slowly veered the stem of the rushing steamer and a shell hurtled over the pilothouse and went singing towards the beach.

Anderson kept his gaze fixed on the breakers, and in the same calm tone said "Steady." On ploughed the steamer straight for her goal, while the group of men in the pilothouse stood in profound silence but fairly quivering with suppressed excitement. The blockader, finally seeing that it was impossible to overtake her and not desiring to come within range of the big guns at Fort Fisher, abandoned the chase with a farewell shot, and the Mary Celeste, now nearly on the bar, slackened her pace a little, and nothing but the swash of the sea and trembling thud of the ship under the force of the engine could be heard. The dying pilot, though failing fast, continued in the same calm tone to give his directions. They were now crossing the bar, but had passed the most dangerous point, when he bent his head as if to cough, and the horrified men saw the last symptom which immediately proceeds dissolution - black vomit - and they knew the end was near...At last the bar was safely crossed, smooth water was reached the engine slowed down, the Mary Celeste glided silently into the harbor, stopped her headway gradually, loosed her anchor chains, dropped her anchor, and as the last loud rattle of her cable ceased, the soul of John William Anderson took its "flight to the undiscovered country." 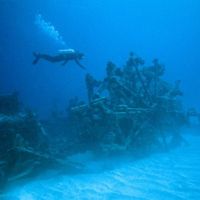