Untitled article on the execution of a Union soldier, New York Tribune, ca. 1865

Untitled article on the execution of a Union soldier, New York Tribune, ca. 1865

A correspondent from the New York Tribune wrote the article on the execution of Union soldier James Preble, on March 31, 1865 in Goldsboro, North Carolina. Union officials convicted Preble of raping a woman. The correspondent from the New York Tribune wrote adamantly, that the execution was done so soldiers “will know acts of barbarity will not be tolerated in an army whose purpose is to restore law and order.” This quote provides an interesting context to the other acts that Union soldiers carried out. Only serious acts, like that of murder or rape were considered acts of “barbarity.” While other acts, such as the excessive foraging of food and personal items from local citizens were not acts of “barbarity.” As Joseph Glatthaar discussed in his book, The March to the Sea and Beyond (1985), “no one in Sherman’s army was ever brought to trial for unauthorized foraging.” Glaathaar’s quote and the article from the New York Tribune paint the picture that excessive foraging practices by Sherman’s men were legitimate tactics of war. Southern citizens that experienced Sherman’s “war tactics” would have disagreed. The image is of a Union soldier being executed but not of Mr. Preble. The image is from Alexandria, Virginia and of a Union deserter being shot, like Preble.

The division arrived on the ground at precisely one o'clock, and was formed in two ranks on three sides of a square, the rear ranks ten paces in rear of the front rank, which came to an about face when the unfortunate condemned one was paraded through the ranks.

At about twenty minutes to three o'clock, the procession which attended the unfortunate man who was soon to be summarily summoned into the presence of his Maker, made its appearance in the following order: A detachment of the One Hundred and Thirty second New York and Seventeenth Massachusetts Volunteers, under command of Captain Keenan, Acting Provost Marshal, four men carrying a coffin, an ambulance containing the condemned man and his two spiritual advisers, the Reverend H.M. Bacon, Chaplain of the Twenty-fifth Massachusetts. Upon arriving on the ground the unfortunate man was taken from the ambulance and escorted in mournful procession with Drum Corps playing the dead march through the ranks forming the three sides of the square.

James Preble did not appear to be more than twenty years of age, and about six feet in height; his appearance in no way gave indication of the brutality which would be naturally supposed to characterize the appearance of one proved to have been guilty of so heinous an offense. He marched with a remarkably steady step all the way round the square, and but seldom raised his eyes from the ground.

In the center of the space in the open side of the square, Preble's grave was dug and on arriving at it, after marching around the square, the procession halted, and the proceedings and sentence of his court-martial, together with the order for his execution, was read by the Provost Marshal, after which he knelt down by his coffin, with the Chaplain in attendance, and prayed for about five minutes, when his eyes were bandaged with a white handkerchief, and the firing party, consisting of twelve men from the One Hundred and Thirty-second New York and Seventeenth Pennsylvania were formed in line about twelve paces in front of him.

At precisely five minutes past three the order to 'make ready, aim, and fire,' was delivered in a clear and audible tone by the Acting Provost Marshal, and the unfortunate man fell down dead pierced with four balls, one through the neck and three through the breast. He was immediately examined by the Provost Marshal and the surgeon in attendance and pronounced dead.

The whole division was then marched past the corpse, which was placed on top of the coffin, by columns of companies, and filed back to their quarters. This will doubtless prove, as it is intended it should, a warning to evil disposed and reckless men, and they will know acts of barbarity will not be tolerated in an army whose purpose is to restore law and order. 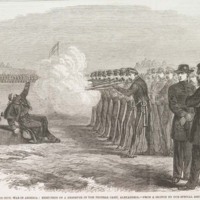