Catherine Ann Devereux Edmondston (pictured) recorded in her diary her various emotional, social, and personal experiences, throughout the Civil War, that ultimately exposed the dominant attitude and perspective of a southern woman. Her diction, rhetoric, and elocution, throughout her diary, implies the fundamental values and expectations of the ideal Southern woman during the course of the Civil War. She maintained praise for the Southern cause and expressed her manner of opinion about such topics as the election of Abraham Lincoln, the secession of South Carolina, the battle at Fort Sumter and those â€œYankeesâ€ up North. Catherine maintains her dairy well after the Civil War had ended, which provides an insight to the reconstruction efforts and the bitter frustrations that plagued the South. This specific diary entry reveals the pre-war sentiment of the South through the eyes of not only a woman, but also a persistent advocate for the Southern cause.

Finished making Blackberry wine. Made in all 28 ½ gal exclusive of one Demijohn which from being I suppose accidentally corked burst. I am told however that a Demijohn will burst even when uncorked if it is filled into the neck. I do not understand it- I should think it would run over and thus relieve itself, & even unless corked uncommonly tight, why does not the pressure rather drive out the cork than burst the vessel? Questions for Sir Humphrey Davy to answer or rather Sir Isaac Newton- seeming not more simple than “why does an Apple fall to the earth?”

Mr. E. went to Goldsboro to attend a Military Convention, its object being to draw up a Code for the organization of the Militia & to petition the Legislature to that effect. God be with him & make him useful in this new sphere of duty! Father seems to think it all useless & descants upon the folly of Gen Wm Augustus Blount who some years ago made a great fool of himself with his Military aspirations. Because Gen Blount’s a fool & did not know how to go to work, is no reason that these gentlemen now in Goldsboro should also decorate themselves with ears. I think they are right, tho I wish they had taken cooler weather for it!

Heard today on Mr. E’s return that they had made him President of the Convention! How shall I behave? I feel like the Militia Colonel’s wife who when her husband was made Colonel, kept exhorting her daughters to “sit up & behave like Cunnel’s daughters”! He says the crowd was terrible, the weather intensely hot, the Military generally well represented by delegates from almost the whole State. A Committee whereof he is Chairman is appointed to draft a Militia Law- the Convention to reassemble in the fall at Salisbury at his call.

I wish father was more sympathizing! He does not conceal that he thinks it all folly, childs play, no need of preparation for war; & always winds up with an abuse of S Carolina for her extreme views. Wonder if he takes S C as an exemplar, & by a reverse of the usual figure wherein one stand for many, he makes the many stand for one viz Mr E. I do not see how in the present attitude of the North, sample they have given us in the John Brown Raid, he can be so indifferent to our preparation for the future one. Peter, however is on the other extreme; he is like the War Horse in the Bible who “sniffs at afar.” He almost says with Patrick Henry that “the next breeze that sweeps from the North will bear with it the resounding clash of arms.” He is sure that Abraham Lincoln will be elected & we plunged into a civil war before the year is ended! God avert it! – and keep him from being a veritable Cassandra! He is one only in prediction now; may he never be so in fulfillment. 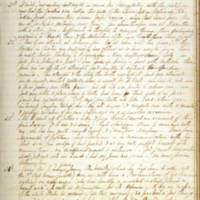