This article, originally appearing in the Charleston Mercury, a strongly secessionist newspaper headquartered in Charleston, SC on January 18, 1865, provides an account of the Second Battle of Fort Fisher. Beginning on January 13, 1865 and ending with the Union capture of Fort Fisher on January 15, 1865, the Second Battle of Fort Fisher was a combined assault by Union Army and Navy forces against the Confederate stronghold at Fort Fisher, a military outpost charged with defending the Confederate port in Wilmington. The Union forces in this battle were under the command of Major General Alfred Terry and Admiral David Porter. Confederate troops were commanded by Major General William Whiting, General Braxton Bragg, and Major General Robert Hoke. This article includes detailed information on troop numbers and movements as well as resulting casualties and prisoners of war taken.

THE LAND ATTACK ON WILMINGTON - DEFENCE AND FALL OF FORT FISHER

Our community was much depressed yesterday by the news, which reaches here in the forenoon that Fort Fisher, the gate of the Cape Fear River, had succumbed to another tremendous combined land and naval attack by the enemy. It was currently stated that among the incidents o the disaster, 3000 of our men, including General HAGOOD and his Brigade, General WHITING and staff, and Colonel LAMB and his gallant garrison had been made prisoners. Colonel LAMB and Generals HAGOOD and WHITING are all reported to have been wounded - the last named in six places. We annex a detailed account of the attack from a Wilmington contemporary: (From the Wilmington Journal of Monday)

As already stated in Saturday paper, the enemy suddenly appeared off our coast on Thursday night last, and commenced landing on Friday morning at daylight. On Friday they landed a considerable force, differently stated by prisoners to be from ten to fifteen thousand and to be under the command of General Terry - Prisoners differ very much about the number, knowing or professing to know only the force on board the same vessels with themselves, which we think is quite likely. All seem to agree upon the statement that Gen. Terry is in command of the land forces.

On Friday the bombardment of Fort Fisher was heavy, especially so towards nightfall. Up to six on Friday evening the casualties by the enemy shelling were some forty-four, four being killed and about forty wounded. In the wounded is included Sergeant Thos. E. King of Sutherland Battery, who was acting as a courier.

Dr. James A. Miller, Chief Surgeon, reports fifty-two wounded as being received at Smithville from Fort Fisher on Saturday, also that three were killed, of which the names are given in his dispatch. We cannot as yet say whether these were all killed or wounded on Saturday, or include part of the sufferers on Friday. We learn that on Saturday and yesterday the bombardment continued heavy, although not heard here with any distinctness.

It is pretty certain that the enemy on Saturday had succeeded in extending their lines across to the river, which their skirmishers attack at Craig Landing - the usual landing of steamers to and from Fort Fisher and Wilmington, and there captured the steamer James R. Grist. On Saturday night or Sunday morning the Grist thus seized by the enemy, was blown up by the Confederate steamer Chickamauga. The Grist was a small Quartermaster boat, old and of no great value.

As we write, about midday our Sunday - in such times there are no Sundays to which at present we can lay claim - the last report we have heard is that things remain pretty much in status quo. The enemy are said to be entrenching across the narrow strip of land between Fort Fisher and Sugar Loaf, but had not landed either horses or artillery. Some deserters from the enemy, confined now in the military prison, say that the enemy force consists of seven thousand whites and four thousand negroes. This is perhaps correct.

General Bragg telegraphed Sunday forenoon that all was quiet, and then there was no cause for excitement or apprehension. The present attempt of the enemy is evidently destined to be more pertinacious and determined than the last.

Information received here through scouts says that the enemy, four thousand strong, started from Newbern on Thursday or Friday, for an advance upon Kinston and upon the Wilmington and Weldon road, and turned back, not deeming their numbers sufficient. They will probably start again when reinforced.

The following dispatch was received here late on Saturday night.

At half-past six last evening, (Sunday,) the enemy were making a heavy assault by land and sea. The bombardment was going on furiously, Gen. Whiting slightly wounded.

At seven and a half the fighting was still continued at the fort - the enemy infantry force far outnumbering ours. It is reported that the enemy had succeeded in establishing a battery on the river above Fort Fisher and below Sugar Loaf, cutting off communication with the fort by water. An uneasy feeling pervades the community. The gallant defenders of Fort Fisher are passing through a terrible ordeal. God grant that they may pass through it successfully.

The following official dispatch from General Bragg has been kindly handed to us. SUGAR LOAF, JANUARY 15, 8 p.m.

The sensational reports about Fisher are entirely unfounded. Official information from General Whiting of later hour, reports enemy attack unsuccessful. Fresh troops are being sent to him, and we are confident they will hold it. 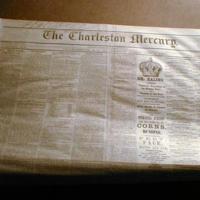