In The Union War (2011), Civil War scholar Gary Gallagher discusses why Northerners continued to fight to defeat the Confederacy. In his book, Gallagher argues that Union citizen-soldiers fought because they believed, above all else, they fought to save “a democratic republic invaluable to only to its own citizens but also as an example of popular self-rule for the rest of the world.” (Gallagher 2011, 162) Gallagher adamantly pushes away other causes like slavery and emancipation. He believes emancipation only became important later in the war, as soldiers saw emancipation as a vital way to hurt the heart of the Confederacy and a vital tactic to win the war, not a reason to fight. The importance of the Union in Gallagher’s book is largely focused on in 19th century ideals, and that some modern scholars fail to realize this. If the Union won it “would silence ‘the haters of liberty’,” but a loss meant “the cause of the working-man and of human rights will be thrust back perhaps for several generations . . . the oligarchs of Europe will well say that republics are impracticable, and human self-government a delusive dream.” (Gallagher 2011, 73) Self-governments were a rarity at this time in the world, with oligarchs and monarchs reigning supreme across the world and particularly in Europe.

Gallagher largely focuses on the perspective of white Union soldiers in the field. He does fail to acknowledge views from the home front and harshly criticizes other scholars for their lack emphasis on why the common Union soldier fought. At times, his chastising of other scholars disrupts the flow of the book.  Other scholars like Chandra Manning, criticize Gallagher for belittling the black soldier in the war effort.

Overall, Gallagher provides solid evidence why the common soldier in the end, and endured four hard years for the Union Army. His book may lack a comprehensive view on support for the war in the Union, but why the citizen-soldier fought is clear.

It has become a commonplace that the war changed how Americans thought of their country.  During the antebellum years, most people said “the United States are . . .” After the war, however, they said “The United States is . . .,” revealing for the first time an understanding of the whole as greater than the constituent parts.  As Shelby Foote put it in his avuncular way: “And that sums up what the war accomplished.  It made us an ‘is.’”  Whether or not 620,000 deaths transformed “United States” from a plural into a singular proper noun (and it is by no means clear that happened), no one should infer a sea change in attitudes toward the nation.  Loyal Americans of the mid-nineteenth century used “United States, “Union,” “nation,” and “country” interchangeably-and never wrote “the Union are . . .,” or “the nation are . . .”  They possessed a strong sense of their nation as a democratic republic unique in the world, bequeathed to them by the founding generation and destined for future greatness if poisonous questions relating to slavery could be settled.

Ulysses S. Grant personified this way of looking at the nation.  Like Lincoln, his mastery of language enabled him to convey a great deal of economical, sometimes lyrical prose.  His post-presidential speeches and writings discussed the war and its meaning with great clarity.  He referred alternately to national armies, the army of the United States, and Union armies – but employed no chronological progression leading from a more parochial usage to an expansive, notion-based one.  In a speech delivered to a group of Americans near Hamburg, Germany, during his world tour in the late 1870s, Grant distilled into five sentences what most loyal citizens would have said gave the most meaning to their great internecine conflict.  “What saved the Union,” Grant told the dinner guests, was the coming forward of the young men of the nation.  They came from their homes and fields, as they did in the time of the Revolution, giving everything to the country.  To their devotion we owe the salvation of the Union.  The humblest soldier who carried a musket is entitled to as much credit for the results of the war as those who were in command.  So long as your young men are animated by this spirit there will be no fear for the Union.”  The nation’s greatest living hero had pared the war’s triumphal elements to a single salient point.  Citizen-soldiers had saved a democratic republic invaluable not only to its own citizens but also as example of popular self-rule for the rest of the world.  The powerful resonance of the idea among the loyal populace established the foundation for understanding the Union war. 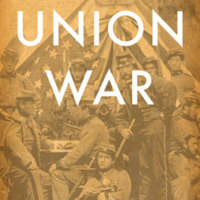