Drew Gilpin Faust, The Creation of Confederate Nationalism:  Ideology and Identity in the Civil War South (1988)

Drew Gilpin Faust, The Creation of Confederate Nationalism:  Ideology and Identity in the Civil War South (1988)

In her book, The Creation of Confederate Nationalism (1988), Drew Gilpin Faust explores how southerners sought to create nationalism for their new country. Faust demonstrates how prominent Confederates used religion to help create a cultural base to gain support to carry out a political platform. However, as the Civil War evolved, the substance of the Confederate nationalism enhanced discourse among southerners, particularly with the sins of extortion and slavery reform. Eventually, the problems and contradictions that occurred with the two sins demonstrated why Confederate nationalism failed; its foundation was too weak. Faust uses a wide variety of sources, from Confederate elites, religious figures throughout the South and even the common woman at home during the Civil War to support her stance.

Faust lays out clearly in the fourth chapter, “’God Will Not Be Mocked’: Confederate Nationalism and Slavery Reform,” at the start of the war people in the South were fighting for mainly one thing and one thing only, slavery. As Faust argues in her book, “Leaders of the secession movement across the South cited slavery as the most compelling reason for southern independence.”  Faust even quoted Confederate Vice President Alexander Stepehens as saying, slavery was the “corner-stone” of the new nation. Faust clearly asserts the role of slavery in Confederate civilians supporting the Confederate cause.  (Faust 1988, 59)

Faust could have greatly added to her argument if she would have provided sources from Confederate soldiers discussing how a lack of Confederate nationalism affected them, since they were the ones fighting. Faust alludes this when she notes that women could write and tell their husbands to desert. This argument would add to Faust’s belief that the lack of a strong sense of nationalism throughout the Civil War led to the South’s defeat. Without the addition of other sources from soldiers, the lack of strong nationalism is only a part of why the South lost, in addition to a lack of resources, soldiers, and adequate leadership.

Curiously, historians have tended to understate the importance of slavery within southern consciousness during the war. In part, this may be because in postbellum decades many southerners themselves disavowed slavery as a major cause of the conflict. Like former Confederate vice-president Alexander Stephens, they instead stressed political or constitutional considerations, which seemed more palatable, even honorable, after emancipation had become a fait accompli. And recent scholarly work, while in many cases emphasizing the institutional importance of slavery, has not fully explored its place within the more subjective realm of Confederate thought. Paul Escottâ€™s 1978 study of Jefferson Davis, for example, emphasized the Confederate presidentâ€™s relegation of the slavery issue to a â€œsubordinate positionsâ€ within Confederate ideology, and Michael Johnson has advanced a similar interpretation of secessionists in Georgia. There has been little treatment of the ideology of slavery within the Confederacy, even though during the war years, many Confederates, like Alexander Stephens himself, hailed the peculiar institution as the new nationâ€™s â€œcorner-stone.â€ And scholars have neglected as well the way in which popular culture echoed the concerns of these official spokesmen. Historians have focused on the joint disintegration of the formation of Confederate national identity. Jefferson Davis, rendered progressively more sensitive to slaveryâ€™s worldwide unpopularity by the reports of Confederate diplomats in Europe, may have de-emphasized its centrality to the southern cause pragmatic reasons; but Confederates addressing national, rather than international, audiences did not follow this example. Although Frank Vandiver, among others. Has seen Alexander Stephensâ€™ position as the exception to the â€œmoderate posture struck by every other Confederateâ€ on the slave question, Davis, not Stephens, was in reality the anomaly. 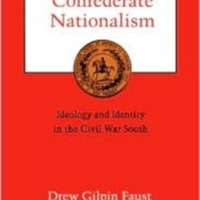