Catherine Ann Devereux Edmondston (pictured) recorded in her diary her various emotional, social, and personal experiences, throughout the Civil War, that ultimately exposed the dominant attitude and perspective of a southern woman. Her diction, rhetoric, and elocution, throughout her diary, implies the fundamental values and expectations of the ideal Southern woman during the course of the Civil War. She maintained praise for the Southern cause and expressed her manner of opinion about such topics as the election of Abraham Lincoln, the secession of South Carolina, the battle at Fort Sumter and those â€œYankeesâ€ up North. Catherine maintains her dairy well after the Civil War had ended, which provides an insight to the reconstruction efforts and the bitter frustrations that plagued the South. This particular diary excerpt focuses reveals Catherine's discontent with freed slaves in the Reconstruction period.

We went to bed last night congratulating ourselves that at length we had begun to taste some of the immunities of Free negroism. The negro contracts were all signed by them & witnessed & they seemed not only contented but thankful for them. Such of the people as Mr E did not wish, or who did not wish themselves to remain, were moving or had moved off goods & chattles & we had a feeling as tho' some of our cares were at an end. At least we had no longer negro children or babies to be responsible to God for; that was shifted to the shoulders of the Yankees and their parents, Yankees first, for taking them from good & competent attention. Nay, Mr E need no longer trouble himself to make a parcel of lazy women support themselves. That care was henceforth their husbands. Their idleness was no charge to him. All seemed merry as a marriage bell, but presto, scarcly was breakfast dispatched when up came every negro man on the plantation, H F Solomon alone excepted, to announce that they were discontented with their contracts, wished higher wages, more privileges & only ten hours work and to say that their bargain must be changed because they had heard that some body somewhere was going to "do better." This Mr E. steadily refused, set forth the folly of signing an agreement one day & drawing back the next for some idle rumour or for some unprincipled emissaries sent forth to tamper with them & by promises & word of mouth bargains which it cost nothing to break, showed them that their arch tempter, one Smallwood, did not give them so much as he did, that he hauled them no wood & would charge them for the pasturage of their hogs, etc., etc., but no.

The Demon of change & discontent was abroad, so with sullen looks & unwilling footsteps they went off discontentedly to begin the year's labour. Two

of them, Hatch & little Aaron, went off to Halifax to lay their complaints before the "master man" there, as Hatch calls the Freedman's Bureau agent, this Pennyman. Mr E. sent Mr Higgs (his overseer) off with a copy of the contract & a letter to Lieut Pennyman, in which he reminded him of the pledge he had given that he would compel the negroes to keep their contracts when made & a request that he now return Hatch & Aaron to their homes. So we will now see whether this thorn in our sides acts according to the Law or not.

Terrible weather for ten days back. Incessant rain & mist. Cuffee ought to echo amen to the prayer, "pray ye that your flight be not in the winter." Smallwood, the enticer of our poor negroes from their comfortable homes, has not yet hauled their things from the rivers bank altho he promised to do so some days since. He has no houses for them, expects them to build them themselves & that at this time of the year & the trees yet growing of which they are to be made. He promises unlimited credit at his store and whisky is to flow like water around them. Assures them that he will. 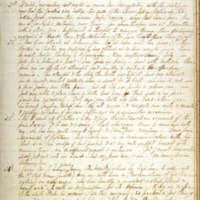