Arument on the Admission of Proof of Existence of the Ku Klux Klan of Mr. Boyden, 1871

Arument on the Admission of Proof of Existence of the Ku Klux Klan of Mr. Boyden, 1871

Nathaniel Boydenâ€™s argument regarding the admission of evidence on the Ku Klux Klan is detrimental to the respondentâ€™s case. The main reasoning behind the impeachment stemmed from acts committed by secret organizations located in Alamance and Caswell Counties. Mr. Boyden argues that these secret organizations existed, not for retribution of one specific person, but rather to demolish the laws granting a black man his rights. Mr. Boyden argues that the acts committed by these secret organizations were in fact treason in that they tried to eradicate the laws set forth in the Civil War amendments. Nathaniel Boyden points out that the Shoffner Act of January 29th, 1870, which granted the Governor the power to declare an insurrection in the event that local authorities were unable to protect the citizens of their respective counties. 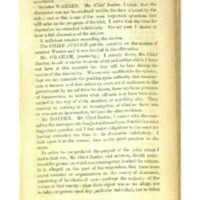