This letter was composed by Joseph J. Hoyle shortly after his regiment was formed and began fighting in Northern Virgina. He wrote the letter to the Spirit of Age where it was publicly printed. The letter emphasizes the role religion played in the Confederate Army. Specifically, discussing the prevalent view during the war of the Lord's providence and divine direction.

The following letter was printed in the September 22, 1862, issue of the Spirit of Age

All governments are swayed by the hand of Providence; for we are taught in Holy writ, that 'the powers that be are ordained of God.' The Old Testament contains sufficient instances, in connection with the history of the Jewish nation, to convince any man that God fundamentally directs the political concerns of man. This being admitted, it follows, as in the case of individuals, that God confers blessings or curses upon a nation, as it gives obeisance to His laws, or spurns his holy teachings.

This being established as a standard, it is easy to trace out the primary cause of our present difficulties.

God saw the oppression of our forefathers and delivered them from the yoke of tyranny. He gave their country nationality, and by His blessings, out of the western wilds a vigorous and promising naiton was built up. It was permitted to add attainment to attainment, till it equaled if not excelled the most renowned nation of the eastern continent. ow in all this, God had a design, and that design was nonone other than that for which He created man- that His name might be glorified. All His designs are ultimately in furtherance of His grand design for the salvation of the human race. But unfortunately for our once happy nation, it thwarted the design of its creation. - With celebrity, came arrogance and pride; with wealth, came cheating and defrauding; with honor came depraved ambition with its retinue of evils. The crimes of our nation became "great," and its sins "very grievous." So He determiend to scourge us for our iniquities, and justly entailed upon us this cruel war, with all its horrid consequences. His righteous judgements are visited upon us.

Now as His wrath burns against us on account of our sins, and as he holds the hearts of men in His hands, it follows that our deliverance must come through His agency alone. But God cannot, consistent with His attributes, deliver us from this scourge of war, while we continue in that course which brought it on us.

We must repent! yea, we must bow down in sack cloth and ashes. Repentance, humiliation and reformation can only bring the approving smile of a righteous God upon our young Confederacy; and these will as surely bring them, as cause produces effect. The teachings of the Bible confirm this proposition at every point. Now we are prepared to ask the question: Have we indeed repented, as a nation? True, we have made some show of national repentance, but have we as a people humbled ourseleves in heart? Have we cast off all idle amusements and wordly pleasures, and besought the Lord with sincerity of heart in our behalf? In a word, I ask, have we repented as a people, in the full sense of the word?

Look at the corrupt cravings of depraved humanity, in the form of fraud, speculation, cheating, &c. Look at the arrogance and pride cocnspicious in all our cities and towns. Look at the corrupt aspiratiosn of hell-born ambition; look at the great amount of wickedness pervalent among our soldiers; and then answer if we have bowed down in the dust of true repentance? Will a righteous God deliver us while we continue in these things? We have no promis that He will yea, we have hope, based upon the Bible, that he will.

I earnestly entreat every man and woman to earnestly consider from whence our deliverance must come, and the means, on our part, to be used in procuring it. - The matter earnestly commends itself to every individual in the Confederacy.

" At thy rebuke, O God of Jacob both the chariot and horse are cast into a dead sleep. Thou, even thou are t obe feared; and who may stand in the sight when once thou art angry."

Read the eight chapter of Deuteronomy. 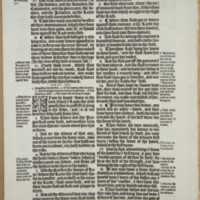