Resolutions for Secession by Arkansas and correspondence from David Walker, President of the State Convention of Arkansas, to the governor of North Carolina inquiring as to the status and future plans of North Carolina related to secession. This letter reflects the mindset of southern states over the issue of secession, and the concerns of other slave holding on their secession from the Union. North Carolina was one of the last states to leave the Union, as a result during North Carolinaâ€™s secession crisis Confederate states would send letters and representatives to convince NC to secede.

Little Rock, March 29, 1861 To His Excellency, J.W. Ellis Governor of the State of North Carolina Sir:- By the fifth of the Series of Resolutions which I have the honor herewith to transmit to you, and which were adopted by the State Convention of Arkansas, on the 20th day of March, 1861, I have respectfully to request that your Excellency will inform me as soon as convenient and practicable what action your State has taken, or proposes to take, on reference to the proposition to hold a border Slave State Convention, at Frankfort, Kentucky, or elsewhere, during the coming Spring or Summer. This information is sought with a view to guide the action of the Commissioners or Delegates elected by the Convention of the State of Arkansas, to said Convention or Conference of the Border Slave States, should one be held. I trust your Excellency will furnish the desired information at your earliest convenience. My P.O. address is Fayetteville, Washington County, Arkansas. Very Respectfully Your Obedient Servant David Walker, President of the State Convention of Arkansas By E C Bandinot, Secretary 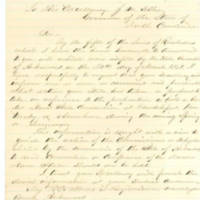