In his book, Making Race, Making Power: North Carolina's Road to Disfranchisement (2003), sociologist Kent Redding examined the context for the disfranchisement movement in North Carolina during the late nineteenth and early twentieth centuries. Rather than focusing on who was responsible for disfranchisement or why these individuals fought to restrict suffrage (although he did discuss these questions) Redding chose to examine how disfranchisement was enacted and why it took so long for these measures to be put in place. He argued that in the aftermath of Reconstruction, although Democrats certainly embraced a white supremacist message, the party was divided over a number of issues including suffrage. While some Democrats supported poll taxes and literacy tests, which would have prevented many African Americans from voting, others were concerned about the effect these laws might have on poor whites and, unwilling to risk upsetting their constituents, refused to support the measures. According to Redding, Democrats were only able to pass a suffrage amendment after they adopted new organizational strategies in the wake of losses to a collation of Populists and Republicans in 1894 and 1896. He claimed that until 1898, the Democratic Party relied on a localized, vertically-oriented support system, dominated by elite whites, in order to maintain their power. The Populists and Republicans, however, were able to organize horizontally by creating a broad base of support among both African Americans and frustrated white farmers, a plan which allowed them to upset the foundation of Democratic power. In an effort to regain control of the government, North Carolina Democrats reorganized their party and adopted a state-wide, horizontal strategy which placed increased emphasis on issues of shared white identity and masculinity. Redding maintained that this shift combined with both the superior resources of the Democratic Party and underlying problems in the alliance between the Republicans and Populists helped to put the Democrats back in power. Unwilling to risk a reversal of their victory, these Democrats were now willing to enact disfranchisement measures which would prevent both African Americans and poor whites from challenging Democratic authority. In order to support his arguments, Redding utilized a variety of different primary sources including census records, organizational and governmental journals and minute books, and newspaper articles. He also relied heavily on quantitative analysis in order to examine, for example, how things like race, class, and election laws affected voter turnout both before and after the passage of the suffrage amendment. Although Redding himself is a sociologist, he does advance a historical argument and his findings can certainly be utilized by historians who are unable or unwilling to undertake statistical analysis themselves

Democratic elites were able to make and regain power in the 1870s because they had established mechanisms for doing so, mechanisms that fit well with the vertical patterns of social relations of North Carolina’s society and tapped constituents’’ identities and interests. Even though black Republicans were able to develop powerful mechanisms for organizing themselves politically, these mechanisms were too new and weak to allow the Republican party to retain power during Reconstruction or to regain it shortly thereafter. In the years leading up to 1894, changes in Democratic patterns of traditional neighborhood and patronage association were breaking down linkages of community members to party, obstructing bases for making power at the local and state levels. A conventional understanding of their weak resource bases and institutional position in the state of North Carolina would suggest that Populists and Republicans never should have been able to gain power in the state in 1894. However, by virtue of their innovative approaches to mobilizing their constituencies – the horizontally oriented mechanisms of building political organization around and accentuating the identities and interests of blacks and farmers – they were able to overcome such deficits. The clever marshaling of these mechanisms gave the fusion of the two parties the upper hand as long as they had the innovative edge. But when Democratic leaders adopted largely the same tactics and organizational structure, their resource advantage came dramatically into play. The Democrats’ organization did not develop through any clear plan but resulted from a series of steps and missteps by their political opponents and finally by Democratic elite countersteps over a period of thirty years. These countersteps allowed the party to systematically exploit racial sentiments in ways not previously available to them. The race making and power making of 1898 and 1900 gave Democratic elites the opportunity to institutionalize the political advantage they gained in those years, and they did not hesitate to seize it. 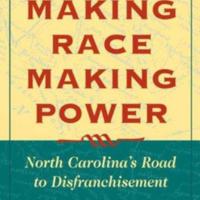