After finding the secondary literature on African-American experiences in the Philippines to be insufficient to accurately relay the narrative of African-Americans fighting against racial imperialism at home while simultaneously fighting the imperialists’ war abroad, Brown analyzed an assortment of primary sources to guide his interpretation of African-American-Filipino social relations. His primary sources include: soldiers’ letters; American newspaper articles; Filipino newspaper articles; and two oral histories of African-American soldiers who chose to stay in the Philippines at the end of the war. His early critique of the existing secondary literature sets a tone of distinction for his work. It is a study that connects American domestic and foreign policies at the end of the nineteenth century through a lens of racial ideology.  At the same time as the disenfranchisement movement found successes in the American South, native Filipinos were denied the right to self-determination in the Philippines  By assessing the effects of the importation of Jim Crowism in the Philippines, Scot Ngozi-Brown makes a case for the extent of American racism at home and abroad.

U.S. racial imperialism, at the turn of the century, targeted Filipinos and other peoples of color throughout the world whom white Americans considered barbaric and thus incapable of self-government. Within the borders of the United States, however, the southern political class regarded African-Americans in a similar manner. Racist senators such as Benjamin "Pitchfork" Tillman from South Carolina argued that African-Americans had not yet acquired the intellectual capacity necessary for suffrage. The replacement of Reconstruction's civil rights gains with Jim Crowism and disenfranchisement was facilitated by the view that it was unnatural for black people to participate in the electoral process.

The fates of African-Americans and Filipinos were bound by their common disenfranchisement. Neither was regarded to be capable of full political participation and self-determination. Nor did either possess a sufficient coercive apparatus to challenge the hegemony of the powers that made decisions about their political destiny. The turn-of-the-century American quest for empire abroad occurred at a time when the specter of disenfranchisement, economic dislocation, mob violence, and terrorism plagued the black population at home in the United States. The federal government granted the Southern States the right of self-rule and, by the 1890s, southern "redeemers" had taken power in the state governments and imposed poll taxes, literacy qualifications, and discriminatory laws which practically eliminated black suffrage. 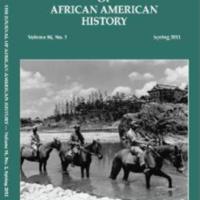