Camp life was extremely difficult on those who sought to uphold their morals and maintain a steadfast faith. Lieutenant Hoyle wrote to the "Spirit of Age" detailing the moral shortcomings of soldiers while in the army.

The following letter was printed in the April 13, 1863, issue of the Spirit of the Age.

Deteriorating Influences of War. No. I

This important topic justly claims the attention of all good men and women; for it has a direct bearing upon the cause of virtue, and furnishes a wide field of labor for the philanthropist.

Any one who has had any experience in camp life will readily testify to the success of the evil influences which pervade the camp in every conceivable form. Many who practiced strict morality at home, and some who even professed christianity, are daily being drawn into the maelstrom of sin and corruption; whose turbid waters are continually agitated by the increasing excitement of its hellish material. Could the Godly mother, who has trained up her son in the way of right; hear the bitter oath and corrupt conversation which fall from his lips, would her heart not be wrung with torturing sorrow? Could the fond sister behold that brother, who formerly seemed so steady and so richly merited a kind sisterâ€™s precious love, join the game of cards, and all the incidental scenes of depravity, would not that kind sisterâ€™s heart, which once he was so careful not to wound, be struck deep with grief? Could the devoted and confiding wife, whose very destiny is wrapped up in the being of her husband, behold his reckless disregard of virtue, and his many acts of wickedness, and moral corruption, would she not wring her hands in unconsolable grief, and dampen her pillow with tears of sorrow.

O, Soldier, think! Think when you are thus running into sin and depravity, of those loved ones at home â€” think with what arrows of grief and despair you are piercing their hearts. Husband, think how unworthy you are making yourself of a confiding and praying wife. Will you thus cast away yourself, and pierce with torturing sorrow that being whom you promised to love and honor.

There must be a cause for this deterioration of morals in the army. Of many which might be adduced. I would suggest a prominent one, viz: The want of female influence. Women of the South, here you have a negative demonstration of the power of your influence. Let me entreat you to consider it, and then persevere in your great mission of love to the lords of creation. While the army is deprived of your influence and of this greater part of your influence, endeavor to render a compensation through the medium of letters and the press. 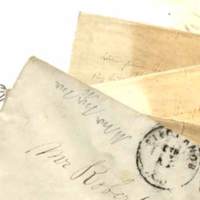