This article from the Raleigh News and Observer, a Democratic newspaper, suggested that the Suffrage Amendment proposed by the Democratic Party was necessary to prevent "negro domination." It claimed that “for thirty years more than one hundred thousand capable white voters in North Carolina have been virtually disfranchised because their voters have been killed by the voters of that number of incompetent negroes.” It went on to suggest that white North Carolinians had accepted this situation for years but since 1895 (a year which also saw the beginning of the Fusionist administration) the political affairs of the state had deteriorated to such a degree that silence was no longer possible. This argument suggested that, despite having thirty years to come to terms with the electoral process, African Americans had proven themselves incapable of supporting good (i.e. Democratic) government and further that, in order to prevent the continuation of “negro domination,” African Americans must be removed from government.

Our friends, the negro chasers, opened their political campaign in behalf of their Constitutional Amendment on Emancipation Day. The selection of the day was characteristically tactful. --- Asheville Gazette (Republican organ.)

No better day could have been selected. New Year's day from time immemororial as been the time for beginning to do better and to turn over a new and fresh leaf. For thirty years more than one hundred thousand capable white voters in North Carolina have been virtually disfranchised because their voters have been killed by the voters of that number of incompetent negroes. As long as that vote did not destroy the peace of society and decent government these 100,000 white men submitted to the practical disfranchisement, but when as in 1895-1898 it resulted in insecurity, outrage, debauchery, and disgrace, these and other white men resolved not longer to submit to it. The last Legislature submitted to the voters an amendment to the Constitution which says to 100,000 negro voters: "You have been used for thirty years for your own and the State's undoing. You cannot vote again until you qualify yourself for an intelligent use of the ballot."

On the first of January, 1900, in nearly every county in the State meetings were held to effect an organization to fully emancipate the 100,0000 white men who though voting for thirty years have seen at every election their votes killed by the vote of an incompetent negro, who cast the ballot put in his hands by a designing selfish politician.

Talk about an Emancipation Proclamation. The passage of the amendment will be the first proclamation of a right to have their vote weigh for good government that 100,000 whtie men in North Carolina have heard in thirty years. Does anybody think these white men will refuse this first and perhaps last opportunity to have a voice in government not killed by an incompetent negro's vote? 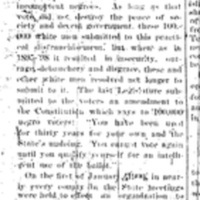