This document united Thomas Ruffin and Benjamin Chambers in a slave trading partnership beginning in February of 1822. Thomas Ruffin was a North Carolina Supreme Court Justice, who was most well known for his controversial decision in State v. Mann in which he gave slaveowners absolute authority to do whatever was necessary to their slaves. This document shows that Ruffin was involved in the slave trade. Ruffin's shame for being in the industry is apparent due to his asking that his name not be mentioned.

The said parties here agree and do hereby agree to carry on together & as copartners the purchasing of slaves & selling the same, upon the following terms. ___ the said Ruffin is to put in & hath at the execution of these presents put in as his part of the Capital Stocks the sum of four thousand dollars in Cash. The said Chambers is to put forth in the sum of two thousand dollars as his part of the Stock; of which he hath of the execution of these presents put in a Negro man called Dick about twenty eight years old at the price of five hundred dollars & two boy horses now with him& a small waggon (sic) at three hundred dollars; & the sum due of twelve hundred dollars & he is forthwith to pay in cash or in negroes at the usual prices or ___ in North Carolina. The said copartnership is to continue three years from the first day of February next. Should one of the said said parties should sooner die or ___ ___ by mutual consent. The whole business of buying & selling is to be conducted by said Chambers, who is to give his whole personal attention to it & is to be confined to persons who are slaves in the United States & is to be carried on in the name of said Chambers alone, & all the slaves purchased by said Chambers during the continuance of the partnership are to be on the partnership account & for their joint benefit, the expenses of the business are to be split equally by both parties & the profit equally divided between them from time to time; & written party is to receive more than an equal part of the profits as above, for his Capital or trouble, except that the account of traveling expenses of said Chambers on the road which suggest in the business is to be payed out of the joint funds. The said Chambers shall at least ___ in every year render to said Ruffin an account of the Stock of the business & of all the slaves bought & sold or on hand, as ___ ___ the ___ ___ or laid out & ___ & ___ if required. At the culmination of the business, the said Ruffin shall receive his Capital of four thousand dollars & the said Chambers shall also receive his Capital of two thousand dollars & each shall receive one half of the profits thus are dated as afore said. And Also, if the said Dick shall not previously be sold, the said Chambers shall, if he or the said Ruffin shall choose, take the said Dick in part of his share of the five hundred dollars. It is also understood that each party is to be an equal share of all profit not arising from the ___ or ___ of the ___. ___ ___ ___ & I call this 26th day of October 1821.
Benjamin Chambers
Thomas Ruffin 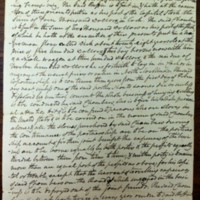 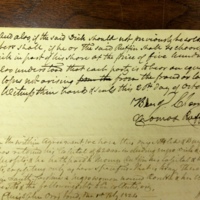