In this article, Charles Irons, history professor at Elon University, describes Alamance County, North Carolina, during the Civil War and Reconstruction. Alamance County residents, like many North Carolinians, were reluctant to leave the Union. This article discusses the reactions of and ramifications for African Americans and whites after North Carolina seceded.

Many whites, particularly in the Upper South, did not support secession. Here in Alamance County, in fact, most voters did not think that Abraham Lincoln’s election in 1860 was sufficient cause to secede from the Union. While statesmen from South Carolina and six other states were forming the Confederate States of America in the early spring of 1861, Alamance County voters repeatedly declared their loyalty to the Union. First, they helped to vote down a state secession convention in late February. A week later, in early March, local luminary Edwin Holt presided over a citizens’ meeting at the County Courthouse at which 1,116 voted to remain in the Union and 284 to join the Confederacy. The county’s 3,445 slaves did not have the opportunity to register their opinions, even though they, along with 422 free persons of color, together constituted one-third of the county’s total population.

When, on April 15, Lincoln responded to the Confederate attack on Fort Sumter by asking for volunteers to help suppress a “rebellion,” he made reluctant Confederates out of many whites. Residents from four slaveholding Border States decided to remain in the Union, but North Carolina seceded along with Virginia, Tennessee, and Arkansas. Approximately 1,400 Alamance County residents, roughly three-quarters of those aged 16-50 at the start of the war, ultimately fought for the Confederacy, most in the Sixth or Seventh Regiments of North Carolina Infantry. This was an extraordinary rate of participation by any standard, though it lagged behind the statewide rate of over 80 percent. Some Alamance County whites were vocal about their opposition to the war, which may help to explain this discrepancy. Prominent Unionists helped to organize a clandestine organization called the “Red Strings,” which shielded some men in the Piedmont from compulsory military service. Those who fought left the county to do so; there were no battles in Alamance.

African-American residents of the county were also active during the sectional conflict. Through flight, work stoppages, and--sometimes--through military service, they helped to undermine the Confederacy and to secure their emancipation. Approximately 200,000 black Americans, the majority of whom were enslaved at the outbreak of the war, ultimately enlisted in the Union Army. About one hundred of these soldiers hailed from Alamance, including Wyatt Outlaw. After the war, Outlaw labored on every front to forge racial equality in the county of his birth. His efforts earned him the notice of elected Republican Governor William H. Holden, who appointed him one of three town commissioners for Graham. Outlaw, who was reelected to the post, attempted to facilitate cooperation between the county’s working class whites and blacks. Wealthy county whites, who had the most to lose from such a coalition, did not tolerate Outlaw’s rise to prominence. On February 26, 1870, more than one hundred members of a vigilante group known as the “White Brotherhood” dragged Outlaw from his home and hung him across from the courthouse. In case anyone missed the point, they pinned a note to his corpse, warning “Beware all you guilty both black and white.”

The murder of Wyatt Outlaw elicited a strong response from the Republican governor, who sent troops to root out the offenders. In so doing, he played right into the White Brotherhood’s hands. North Carolina whites resented the vigorous application of state power and successfully impeached Holden. Alamance County thus played a prominent role in the process through which white North Carolinians reestablished white supremacy after the Civil War. 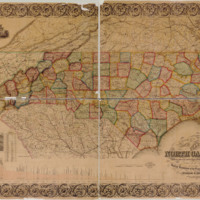