In this editorial, Charles Irons, history professor at Elon University, demonstrates that slavery was the primary cause of the Civil War. He provides a counter-argument to those who claim the war was fought over states' rights or in defense of "hearth and home." Irons also explains why remembering the Civil War accurately matters in the twenty-first century.

The Sons of Confederate Veterans--in their published literature, in the pages of this newspaper, and at the fictional "Battle of Zachary Hill" held in Snow Camp three weeks ago--have argued that the Civil War was not primarily about slavery.

They are able to make this argument largely because they choose to emphasize the motives of individual soldiers instead of those of the Confederate government. Unsurprisingly, given this focus on private rather than public motivation, they find that many fought primarily in defense of hearth and home.

This rhetorical slight of hand, hiding the national sins of the Confederacy behind the virtue of individual Confederate soldiers, is bad history. It is also a recipe for bad citizenship.

White, Southern politicians from seven states in the Lower South formed the Confederate States of America in March 1861 for the purpose of preserving African slavery. The Confederacy's Vice President, Georgia's Alexander Stephens, explained to a cheering crowd in Montgomery, Alabama the new nation's foundational principles.

The idea that all men are created equal was "fundamentally wrong," Stephens declared, adding that: "Our new government is founded upon exactly the opposite idea; its foundations are laid, its corner- stone rests, upon the great truth that the negro is not equal to the white man; that slavery--subordination to the superior race--is his natural and normal condition. This, our new government, is the first, in the history of the world, based upon this great physical, philosophical, and moral truth."

Confederate statesmen resoundingly approved Stephens' remarks. Delegates from the Confederacy who tried to convince other states to join them in their defense of slavery argued that the Confederacy's chief advantage over the United States was that it preserved African slavery.

Alabama's delegates to North Carolina, for example, warned of the horrors that would overtake the state if Carolinians allowed Lincoln to enact his antislavery agenda. White children, they prophesied, would "be compelled to flee from the land of their birth, and from the slaves their parents have toiled to acquire as an inheritance for them, or to submit to the degradation of being reduced to an equality with them, and all its attendant horrors."

The states of the Upper South made their devotion to race-based slavery clear when they proposed at the Washington Peace Conference a series of Constitutional amendments that would keep them in the union. Not one of these amendments had to do with the tariff or with internal improvements. All related to race-based slavery, prohibiting the federal government's right to interfere with the institution and guaranteeing its expansion.

When Northern Republicans refused these compromise measures, white residents of the Upper South worried that their property in persons was not safe in the Union. When, after the firing on Fort Sumter, Lincoln called for troops to bring the Confederate States back into the Union, they saw those fears confirmed. Lincoln, they concluded, would end slavery by force.

This was enough for whites in Tennessee, Arkansas, Virginia, and North Carolina, who joined the Confederate States of America.

Some argue that whites from the Upper South were more concerned with defending states’ rights or with protecting the "Southern way of life" than they were about slavery. The trouble with this view is that white Southerners consistently identified their right to own slaves as the only state’s right worth fighting over. Moreover, slavery and white supremacy characterized the "Southern way of life."

As Virginia's Attorney General, John Tucker, put it in 1863, "This relation [between master and slave] was our social necessity. Its disturbance would be a social disaster--might be our social ruin. We could not surrender its control to any other than ourselves--especially to those who could not, or would not understand it--and, more especially, to those who were not only ignorant of the nature of the relation, but who religiously and fanatically detested it, and politically and socially antagonized us, on account of it."

When we substitute individual motivation for national motivation in our analysis of why Confederates fought, we strip history of its power to teach us how to live in the present. We sidestep, for one thing, issues of racial justice at the core of the Civil War and Reconstruction. By denying the extraordinary efforts white Americans have historically undertaken in order to subordinate black Americans, we undermine the moral imperative to work for racial equality today.

The "defense of hearth and home" interpretation of the Civil War is also a recipe for bad citizenship, because it encourages us to ignore our complicity in our government's decisions.

When we excuse our leaders for violating human rights so long as we feel like we are being decent as individuals, we abdicate our obligation to hold our government accountable for its actions. This lesson is as valuable today as ever. 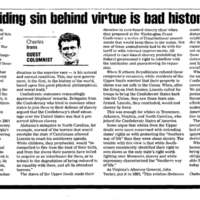