This article marks the summary of the Southern Claim's Commission investigation into the claims of William Thomas Britton, a resident of Hertford County. The claimant was filing on the behalf of his father, by means of a will leaving properties to him. However, he was old enough to serve as a soldier and is not able to sufficiently "prove his loyalty" so his claim is disallowed.

The claimant was 18 years of age when the war ended. He does not prove his loyalty although old enough for a soldier- testifies for himself, but does not ever say his sympathies- were with the union cause- He claims under his grandfather's will, who died during the war- that will gives claimant 2/3rd of all testators accounts and the claim, must pass if all by the will under that clause and he should make claim to only two thirds- but loyalty is not here, and the claim must be disallowed. 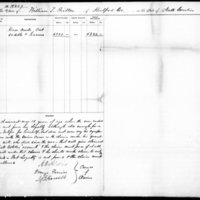