Joseph Etheridge's petition to the Southern Claims Commission, listing what he claims was taken by Union foraging parties and his valuation of those goods. His claim was rejected for several reasons, including his ownership of several farms and constituent slaves. 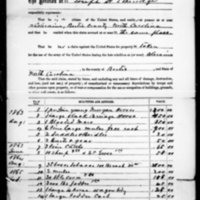