The primary source that I have the strongest connection to would be the image I took while doing research in Windsor, of the Memorial to the Confederate Dead. It is a somewhat tall, imposing statue situated on the corner, right next to the courthouse, directly across from the library, and very near to the center of town. It is this statue that inspired me to take up the project that I have worked on this semester, a study of Unionism in Bertie County. I have no qualms with the statue existing (the war was as unfortunate as any war can be with too many dead on both sides). But where is the memorial to the Union war dead? Why would there be a separate memorial in the first place? These questions highlight something of a forgotten narrative in the region. The statue is indicative of a number of failures of society: a failure to properly educate citizens as to the causes of the war, a failure to make sure people understand what the war was fought over, even a failure to understand basic human dignity. It is this failure of education that keeps pulling me back to the topic. My primary school education in the field of history is somewhat infuriating in retrospect. While it did a decent job of teaching me the facts of history, it never or rarely ever challenged me to examine why things happened the way they did. There was never any exploration of the morality and motivations of those involved or indeed even a discussion on the nature of history being shaped by the victors. In particular, the Civil War was untouched, perhaps because to approach the topic is to offend "southern pride" or "insult someone's history." If we are to ever advance as a people, we must not shy away from controversy because it is uncomfortable, and a discussion of the history of this monument is as good a place as any in the county to start. 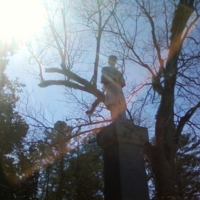