Remarks by the Southern Claims Commissioner in response to the allowed claim of Allen Ellis. This claimant was an abolitionist preacher in Chatham County and was found to be meet the requirements set forth by the Commission. $384 of his requested $648 was allowed.

"Claimant was about 53 years old when the war began and was a farmer, carpenter, and preacher near Pittsboro in the central part of North Carolina. His conduct and feelings about and during the rebellion are thus stated my himself in his testimony 'My sympathies were with the North during the entire war- I believed that bondage of man was unlawful and wrong and I thought the South was fighting wrongfully. I was called an abolitionist and that was what I was. I never changed my mind and am of the same opinion still... I did all I could for the Union cause. I voted that way; I preached that way; I talked that way- that was my side all through the war... After the state passed into rebellion, I kept faith with the Union. Upon the news of the battle of Bull Run I felt sorry but not discouraged. I would rather the Union troops had came." These are words of genuine loyalty and the special commissioner to whom they were spoken was a man very likely to know whether they were true words as well as loyal ones and not at all likely to keep back his knowledge from the claimant or ourselves if it had run contrary to the claimants' declarations. This commissioner says of the claimant: 'While in the claimants neighborhood I made inquiries as to his loyalty and the universal testimony was that he was a devoted Unionist.'

Claimants neighborhood did not become the scene of military operations and movements till the last months of the war; hence it was comparatively easy for him to keep himself free of complicity in the rebellion at the same time that he was deprived of the opportunity of doing service to the Union if he had so desired. He was exempted from Confederate military service by physical disability as the exemption paper produced by him shows. Threats were now and then made against the Union men generally but none were specially directed at him. Joseph Yarborough aged 74 when he testified and who given satisfactory account of his own loyalty was a near and intimate neighbor who frequently discussed the war with claimant, but cannot remember the details, says: 'He was always very determined in his opposition to the war and to secession... It was given out by everybody that the claimant was utterly opposed to the war; I never heard to the contrary by from anybody... I never heard but one expression of opinion about him...' John Clark and Isaiah Rigsbee, also describing themselves as Union men, testify the same way and W.P. Holt, that not pretending too much personal knowledge testifies the same way as to claimants reputation. We find him to have been loyal during the war.

The property was taken at about the close of the war by Gnrl. Slocum's division of Sherman's army during its march from South Carolina towards Virginia. It was taken in the usual way with that army on the march, officers being present to superintend the taking: everything being taken that would feed or move the army and no receipts given. We find no occasion to reject any item but the saddle and a small quantity of corn, which the claimant gathered up and saved. We allow the sum of Three hundred and eighty-four dollars in full discharge of the claim." 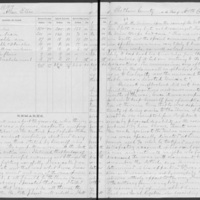