Mrs. Love wrote Governor Z. B. Vance on March thirty-first 1865. She wrote about the condition in her town. She described the shortages of food and labor. She felt that if the troops were called from her town anymore the citizens would starve. She warned the Governor of the power of starvation and that the starving people would take food by force. She requested that the Home Guards return home to help with the harvest. She also stated her support of the Governor in the upcoming election.

Claytonville Nor. Car.
March 31st 1864
Gov. Z. B. Vance
My dear sir,
I would have ventured to write sometime ago but continuing good health helps me at home (my mother in law) I have not been to the village (H) since Dec 24th â€˜till last Saturday, I am â€˜chillingâ€™ for which i can find no cure, otherwise affected I have a hope, I am not permanently improving and that I shall [actlie] this curses war and be at this [eutmvring] of it accused [arigiulored] of course I made this political burial and will sold even more if good came of it, [lo] owm almost reviewed county. But donâ€™t misconstrue or a [devite]. There with sympathizers. Out on by home as I think is in [fom] mainly resist and to Northern invasion.
So you know out conslition here want [abobute] but a suffering for food is the only prospect to many families, difficulties thinking and reverent prospect darkens. The laborers have nearly all been taken away. The [Earothin] officers are now going armed in this [sintrist] Than few they leave with the aid of the [regrabs] (which you know are not nay in this [seetion]) will be barely sufficient if at all so to produce bread and meal for come consumption with these statement I would call your attention to the following fact. If the military are called a few more times, between this and the gathering of corn, our citizens, â€œnearly allâ€ not running slaves, will suffer for food, next winter and the spring and summer of 1865. The [gardue] may be sufficient unlike winter. afterwards suffering I believe starvation, will follow [mlys] [wen] are supplied from abroad. Individually I have nothing to fear in this way. The [wowts] of my immediate relatives, will ,I think, all be fully proved for. But there can be no guarantees [agument] the power of starvation scared Taking my force will be the order of the day. It is [amounted] so now. The minority will have another majority will want and take.
I align with due differance if anything can be done to relieve our â€œHome Guardsâ€ until crops are made. Thirty are [argu] duty for [sytydry] I think it is safe to day 25 of them will almost [wif] on crops. I corn so me so when these came in [con[ a plw to bring starvation be better divided.
Holden stock run high here in [see] I am Feb. it seems above [par] It is high yet. It fell at Wilkesboro and there is quite now [plwm] [hosoerer] sill in market but ventury on the [alaclive] You no loos no by do the same thing [ofier].
I saved your part of the letter [reedoaled] being â€œin-confidenceâ€™ I will the many I want a stiff reply - no one. In this war I am with the South and simply our savior with it. [dadruem] is a tory but my be bought He is for Holden sot rely him. Write whenever I can send you. Belive me to be your friend and humble servant
Mrs Love. 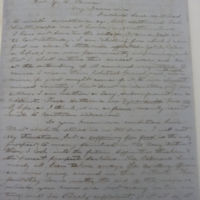 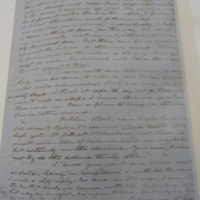