The Richmond Planet, a republican African American owned newspaper lists the number of African Americans killed in the November 10th 1898 riot in Wilmington, North Carolina. The article blames the Governor of North Carolina for compromising with wrong, as the Democrats of Wilmington threatened that the streets would run red with blood unless the Governor removed the two Republicans from the ticket for the open House seat. Armed Red Shirts paraded through that city. Manly, editor of the Record, given twenty four hours to leave the city his office burned down. Waddell now Mayor of Wilmington article questions his authority.

Innocent and Unarmed Colored Men Shot Down.  Hundreds Run to the Woods

The Mob Captures the Town.—White Ministers Aiders and Abettors of Murder.

THE GOVERNOR POWERLESS AND THE PRESIDENT OF THE UNITED STATES SILENT. GOD’S AID IMPLORED. THE CRIES OF DEFENSE LESS,---ANARCHY RULES.

Twenty-five colored persons were killed and as many more wounded at Wilmington, N. C., Thursday, Nov. 10, 1898. The cause of this butchery was the result of a concerted conspiracy which has been under way for several weeks. It was decided to secure the reins of the city government by treasonable practices.

The leaders of the murderous band had openly threatened that unless the Republicans declined to put up a legislative ticket the streets of Wilmington would be run with blood.

Gov. Russell went there and consulted with the Republican leaders. It was decided to agree to the offer of the business men,--to withdraw the two Democratic nominees for the House and to name George Rountree, a gold Democrat and M. S. Willard, a silver Democrat as candidates for the aforesaid office.

With this understanding, the Republicans agreed not to put a ticket in the field.

The Democrats declarde that if this were done the streets of Wilmington would be red with blood. Guns and pistols were purchased. A gatling gun was secured and Gov. Russell was informed that if he took any part in the affair he would be assassinated.

THE PARADE OF THE RED SHIRTS

On the 31st of October, a great parade of Red Shirts took place at Laurinburg, N.C. It formed in the Presbyterian Church Park. This lawless band of white men paraded through the country for about ten miles and were address by Claude Kitchens upon their return.

The vilest epithets were applied to the colored people, and everything done to stir up bad feeling.

In the meantime, white men secured red shirts, emblematic of blood and paraded the streets of Wilmington, a thousand strong. Colored people were insulted and cowed, the colored leaders were informed that if any trouble should occur, their lives would pay the penalty.

THE BLOW AT COLORED LABORERS.

The white element of Democratic persuasion started a movement to get rid of colored labor. Every conceivable means was resorted to, in order to arouse race prejudice.

Cartoons with distorted features of colored men as officials were circulated and the cry of Negro rule and Negro supremacy heralded.

The slightest pretext was taken to inflame passion. It was declared that colored boys had insulted white girls. It was impossible to meet the false assertions, because all kinds and sorts of rumors were presumed to be true, and a denial of them would cause troube.

It was agreed too by the Republicans not to put up a county ticket.

Rev. Dr. Peyton H. Hoge, a white minister of the gospel was on the committee appointed by the murderers to notify Governor Russell that bloodshed would follow that is colored people would be butchered, if a Republican ticket were placed in the field.

A gatling gun was openly drawn through the streets and the purpose for which it would be used boldly announced not only to the authorities, but also to the populace. The mayor received no support and Governor G. L. Russell took no steps whatever to suppress this open contempt of the law.

FORCED HIM TO RESIGN.

W. H. Kitchin, a white democratic ex-Congressman, and his son, Claude Kitchin, in company with a mob, composed of Dr. O. C. Liverman, Thomas Fenner, and John Gray were charged with going to the residence of Registrar B. B. Steptoe (colored) and forcing him to sign a paper resigning from office.

The case was called and the men discharged.

This man, Kitchen who had sworn to support the laws of the country, both national and state was quoted as follows;

The effort was grand, the effect electrical a truly rebel yell went up and for some minutes the band could not be heard. Men, old and young, rushed upon the rostrum and seized the speaker by the hand.”

In the case referred to, as in this movement was against the government and the laws of the land.

Edgecombe county was also in a state of turmoil and Congressman G. H. White (colored) warned not to speak there.

Elijah Hewlett, the white Populist Sheriff was thoroughly frightened and declined to be renominated, declaring that under no circumstances would he offer himself as a candidate.

Near Laurinburg, N. C., November 1st a mob knocked at the door of Philip Dudley, colored, calling him out. They were composed of some of the leading white citizens. Dudley opened fire on them and when he had emptied one of his rifles grabbed for the other gun. He was shot through the body and died the following night.

The white men injured were carried away. Dudley’s family stated that he was told to come out and when they insisted upon entering he called for his gun and firing commenced.

On election day, November 8th, the polls were in the hands of the mob. No effort was made by the Republicans to vote. Armed red shirted men galloped hither and thither and the democrats were triumphant.

Although the surrender had been complete, Governor D. L. Russell having compromised his office, his party and himself, the desire for human gore was so great that a crowd gathered.

THE DEMOLITION OF THE OFFICE.

Resolutions were passed demanding that the editor, Alexander Manley leave the city: and that his office be at once removed and shipped from the city.

Twenty-four hours’ time was given in which to comply. This was a moral impossibility. An answer was demanded by 7:30 a. m., the next day Nov. 10.

A mob of one thousand started for the office of the Daily Record, and looted the same, breaking the presses, destroying the cases and finally setting fire to the building. No effort was made by the city authorities to stop the outrage.

Every white man in the city carried a Winchester, and a revolver, Mayor S. P. Wright and Chief of Police J. R. Molton were forced to resign. Colored men, women and children fled to other sections of the city. Crowds of armed men from South Carolina thronged the state.

Colored men were stopped at every corner and searched for arms.

Six colored men were shot down at first and it is reported that nineteen more were killed and as twenty five wounded.

Three white men were wounded in the affray, but it is asserted by the colored people that the injury came from their own friends in their reckless use of fire arms.

THE MURDERS AT WILMINGTON.

The outrageous happening at Wilmington, N. C., almost surpasses comprehension. Never in the history of this country have we seen or heard of anything like it before.

A mob take possession of the city, and without due cause murders twenty-five inoffensive and unarmed colored people, drives hundreds to the woods to starve and die, forces the city officials to leave the city and then duly install themselves in their places, without the shadow of an excuse of the sanction of law.

To-day, they hold possession of the government of that municipality. The Governor of the state, D. L. Russell is cowed and the President of the United States is silent.

“We are building worse than we know.” We are permitting the seeds of anarchy to take root. We are encouraging the rule of the mob instead of the supremacy of law and order and it will yet cost us much blood and treasure. In no country in Europe, not excepting the so-called barbarous TURKEY could such a condition of affairs obtain.

A.M. Waddell has by treasonable practices declared himself Mayor of Wilmington and this too in the face of the laws of the state of North Carolina.

Who made him Mayor? From whom did he secure his authority? Was it from the red handed murderers, who fiend-like butchered helpless, innocence, left families bereaved and mourning, while the hapless prayers, of the widows and orphans were ascending to DANIELS’S GOD?

Was it from the hands of the white lawyers, the doctors, the merchants and preachers, who while inciting the mobs to deeds of murderous violence, under our laws became particep criminis,--murderers themselves?

If so, show the world your commission. Point out the letters, trace each one in blood and let the people of this nation read the characters stamped across its face. Let them ponder over the fact that the authority given is treason in the eyes of the law of the land and the possessor of it called a traitor by all the law-books beginning with BLACKSTONE and ending with the latest compilations of those of this country.

A.M. Waddell, leader of the mob at Wilmington, you have a bloodstained title.

Tell not the colored people of your desire to preserve the peace and maintain order. The declaration came too late. Walk a few steps into the residential neighborhood where rests the bodies of your victims. Their blood is crying from the ground for vengeance, not in this world, sir, but in the one to come.

Go to the hospital, in the suburbs of Wilmington and see the suffering you have caused there. Hear the mourns of the sufferers and the prayers to the widows’ GOD. Think you that you will escape punishment. Retribution will surely follow, and the punishment will come to you.

It was a sad day for Wilmington when these murderers killed its citizens. It will be sadder times when the punishment of Him, who never sleeps follows.

We are having a hard time of it, and out oppressors are gloating over our misery, but we are not without hope. All of the good white people in the South are not dead, but in the neighborhood of Wilmington, they are painfully silent.

It was murder and treason in North Carolina. The law is specific in both cases. But, who, there cares for the law? Who has thought of the sworn obligations which would have made such an outrage impossible? Of the cut-throats and murderers—not one! 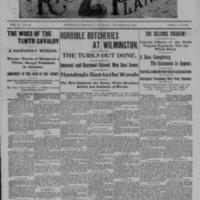